I am not the one announcing the package, I am the one who will help, says CM
Sanjay Jog 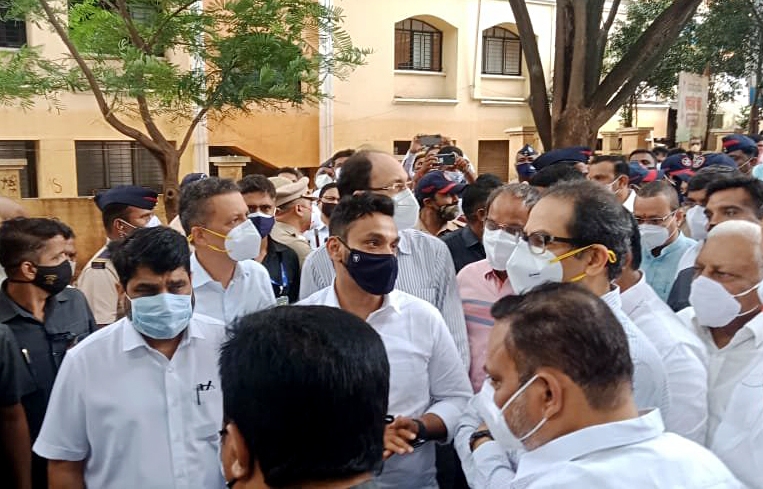 Mumbai: Chief Minister Uddhav Thackeray and Leader of Opposition Devendra Fadnavis came face to face during their visits to the flood-hit Kolhapur district on Friday. They later engaged in a verbal duel over the relief/compensation to be provided to the affected people.

Thackeray took a swipe at Fadnavis saying that ‘Mi Package Mukhamantri Nahi. Mi Madat Karnara Mukhamantri ahe (I am not the one announcing the package, I am the one who will help). He called upon the opposition not to play politics during the present crisis.

"I came to know that Devendra Fadnavis is here. I told him to wait, I'm coming. Because I don't want to play with people's lives. I do not want to bring politics too. If they (opposition) have any good suggestions, we welcome them. We didn't talk behind closed doors,’’ said Thackeray. ‘’I have told Fadnavis that I have three parties with me (Shiv Sena, NCP and Congress). That fourth party (BJP) will also come. Once these major parties in Maharashtra come together, no one will stand in the way of whatever we decide tomorrow,’’ he added. The CM, however, stressed the need for a permanent solution to tackle natural calamities and their impacts.

‘’I have already said that I will not do anything for the sake of popularity. The water in Sangli and Kolhapur is yet to recede. We will consider help once we complete the assessment of the damage caused due to the present crisis. We have announced immediate help,’’ said Thackeray. He further noted that he has made a strong case with the Prime Minister Narendra Modi to change the criteria of help received from the Centre through National Disaster Response Fund (NDRF) criteria as it was released in 2015. He added that the state government last year had helped rain affected people more than NDRF norms.

Fadnavis countered Thackeray's jibe saying ‘’Package mhana va Madat mhana, pan ghoshana kara (say package or say help, but make announcement). ‘’We have no objection. Let him (CM) say it as a package or assistance, that is his view. The CM must make the announcement so that affected people get the aid,’’ he noted.

Fadnavis said that CM has invited the opposition to meet and give their suggestions. ‘’There is a need for a long term solution. ‘’We had studied the floods of 2019 and sent a proposal to the World Bank. We had also enlisted the help of the Central Department to find a way to divert the floodwaters to the drought-hit areas. On November 25, 2019, we had approved the Rs 3,500 crore proposal and the World Bank team had given in principle approval for the same,’’ he added.