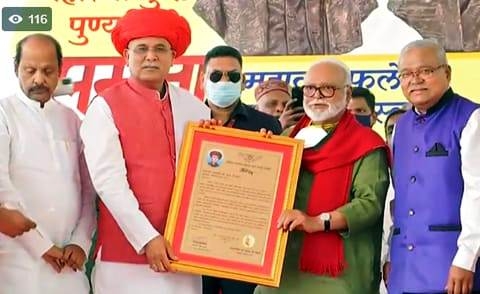 Chhattisgarh Chief Minister Bhupesh Baghel has been conferred the 'Mahatma Phule Samta Award' in Pune on the occasion of 131st death anniversary of Mahatma Jyotiba Phule on Sunday.

The award was presented to him by the National President of the council, Chhagan Bhujbal in a function organized by All India Mahatma Phule Samta Parishad at Mahatma Phule Memorial 'Samta Bhoomi' in Pune. Bhujbal honored CM Baghel with a Phule turban, a shawl, award money and a memento, a government press release said.

"In the history of five thousand years of India, three and a half thousand years were ruled by the backwards. The country's economy was shattered during the British rule. In such a situation, Mahatma Jyotiba Phule worked for the establishment of an egalitarian society through social reform. Mahatma Phule was the leading leader of the social revolution, while the Father of the Nation Mahatma Gandhi was the preeminent social reformer of the political revolution. We are working for the establishment of social justice in Chhattisgarh by following the path shown by these Mahatmas", Chief Minister Baghel said addressing the function.

Meanwhile, the CM Baghel has been selected for this year's award for his extraordinary works and crucial decisions taken towards providing justice to the deprived sections of the society during his tenure, the official communique said.

A copy of Mahatma Jyotiba Phule's book 'Kisan Ka Koda' was presented to the CM Baghel in the program.