The proceedings had been initiated by a magistrate court while dealing with a criminal defamation lawsuit filed by Wadia against Tata and other directors.
Narsi Benwal 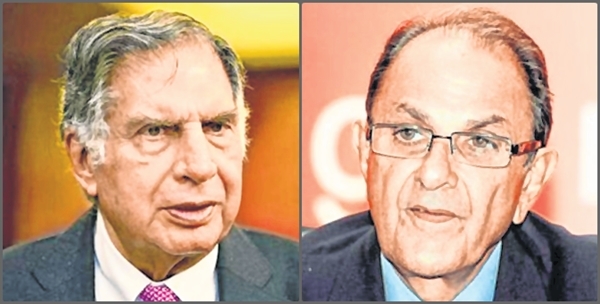 Mumbai: In a major relief for Ratan Tata, former chairperson of Tata Sons and 10 of its directors, the Bombay High Court on Monday quashed the criminal proceedings initiated against them by noted industrialist Nusli Wadia.

The proceedings had been initiated by a magistrate court while dealing with a criminal defamation lawsuit filed by Wadia against Tata and other directors.

Wadia had approached the local magistrate after he was ousted from a group of Tata companies owing to his conduct, which was said to be against the interests of Tata Sons. He filed the lawsuit claiming that the reasoning given by the Tata Sons while removing him had tarnished his impeccable reputation.

He was on the board as an independent director of the group's companies like Indian Hotels Company, which runs the Taj group of hotels, Tata Chemicals, Tata Motors and Tata Steel, among others.

On the other hand, Ratan Tata, through senior counsel Abhishek Manu Singhvi maintained, the defamation case was the fallout of a corporate dispute. He claimed Wadia was a strong supporter of Cyrus Mistry, who had been ousted from the group in 2016.

A bench of Justices Ranjit More and Bharati Dangre, however, refused to accept the contentions of Wadia and instead held that Tata Sons was only exercising its statutory powers to remove its director, in whom they had lost confidence.

It is to be noted that Wadia has never challenged his removal before any court of law, meaning, hereby, he has accepted his removal as an independent director from the holding companies of Tata group and does not question the power of Tata Sons Ltd., to remove him, the bench noted.

The impugned order is a clear reflection of non-application of mind on the part of the magistrate, apart from the fact that he only relied on Wadias statement and failed to examine any other witness.

The magistrate has committed haste in issuing the process without conducting an inquiry into Wadias allegation, the judges said.

The bench further said it could not come across any material to record a prima facie case of defamation against the Tata Sons as there was no intention on part of Ratan Tata and others to harm Wadias reputation.

Publication of the news about a resolution being passed by a well-acclaimed business house happened to be business news for the media and both Tata Sons and Wadia being well-known business personalities, they drew the attention of the media, the bench noted.

The judges further said that it has not yet been established who leaked the news about Wadia's ouster. The bench further noted that the special notices, to which Wadia has taken strong exception, were issued in the name of Tata Sons and not in the individual names of the directors or office-bearers of the company.

Thus, Ratan Tata and others being the directors/officers of Tata Sons Ltd., cannot be held to be vicariously liable and no malice can be attributed to them. We therefore, do not find any justification in the magistrate issuing process to them and holding the special notice is per se defamatory, the bench ruled.