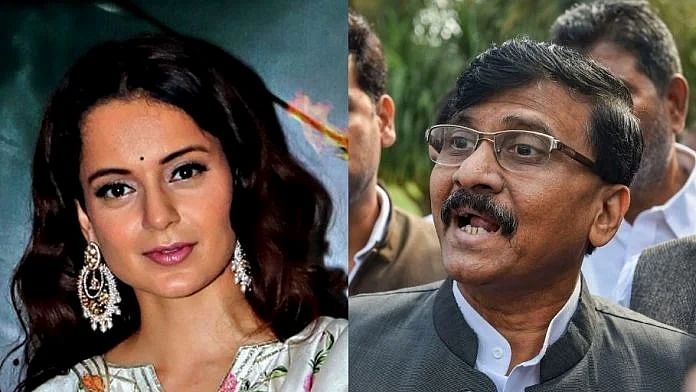 Mumbai: Being Maharashtrians, we should be proud of ourselves, remarked the Bombay High Court on Tuesday, while asking Shiv Sena MP Sanjay Raut to be "graceful and ignore" the comments of actress Kangana Ranaut. The HC while saying that the parliamentarian could have avoided using words such as "haramkhor" maintained that it does not agree with Kangana's statements on Mumbai.

Meanwhile, the BMC's designated officer, who led the demolition action against the actress' bungalow, told the bench of Justices Shahrukh Kathawalla and Riyaz Chagla that he only did his job and did not act at the behest of any political party or politician.

The bench was hearing Kangana's plea challenging the demolition of her bungalow by the civic officials and claimed that the same was nothing but a counterblast to her statements criticising the functioning of Mumbai Police and the state government.

During the course of the hearing, the counsel appearing for Raut told the bench that Ranaut is a "dishonest" person and the entire media is supporting her.

At this, Justice Kathawalla asked if the counsel agrees that Raut indeed abused the actress. "Yes. But my client did not mean to abuse. He only meant that the actress is dishonest," Raut's counsel responded.

The bench then sought to know what Raut meant by saying "kanoon kya hai?" (What is law?).

"Let us clarify, even we do not agree with what she said (regarding Mumbai). But that does not mean we break her house," Justice Kathawalla remarked.

"We all are Maharashtrians and we must be proud of it. This isn't the way to react to such things, especially because he (Raut) is a leader," the judge said further. To this, the counsel explained that Raut had no intention to lower the court or any other authority's dignity.

"You (Raut) should show some grace and set an example for others. Of course, there are other ways within the four corners of law to take action (against Kangana). But this apparently isn't the way to react," Justice Kathawalla observed.

Meanwhile, senior counsel Anil Sakhre, appearing for BMC's designated officer Bhagyawant Late told the bench that the officer, who led the demolition has never met Kangana and in fact has been posted at H ward (Bandra) only in June 2019. “In fact, the officer has done his job. He hasn't acted at the behest of any political party or politician,” Sakhre added.

As far as malice is concerned, Sakhre argued that Kangana has failed miserably in proving any kind of malice. The bench has now posted the matter for further hearing till next Monday.