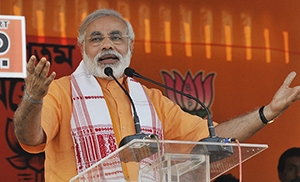 Mumbai : With Shiv Sena unhappy with MNS using Modi’s name and photo during campaign in certain regions of Maharasthra, BJP has written to the election commission for using photo of Modi and BJP’s party symbol.

Bharatiya Janata Party (BJP) has shot off a letter to the election commission against misuse of NDA’s PM candidate Narendra Modi by ‘political parties and individuals’. BJP’s War Room Incharge (election management committee) Shrikant Bharatiya has written to the Chief Election Commissioner to take cognizance against “political parties / individuals regarding violation of mode code of conduct by using images / name of our PM candidate Narendra Modi / logo of our party.”

It becomes evident that BJP has written the letter to the election commission at the behest of Shiv Sena, which is annoyed with MNS blatantly using Modi’s name, image and BJP’s logo in the Loksabha election campaign.

However, BJP has kept the complaint very ambiguous and not mentioned the name of any details particularly party, candidate or instances to help the election take action against such persons or party.

BJP said that alliance known as Mahayuti consists of BJP, Shiv Sena, Republican Party of India (RPI –A), Rashtriya Samaj Paksha (RSP) and Swabhiman Shetkari Sanghatna (SSS). “Expect above parties from our Mahayuti no other parties are associated with us and are not entitled to use our common logo / images / motto and / or name of our Prime Ministeral candidate Narendra Modi,” said the complaint.

It may recalled that MNS chief Raj Thackeray had been approached by former BJP leader Nitin Gadkari who has requested Raj to not field candidates against NDA in the Loksabha polls.

Subsequently Raj had announced his party support to Modi as PM and fielded candidates against only against Shiv Sena and not against BJP.

Pune was the only exception where MNS has announced its candidate against BJP. MNS and BJP coming together had Shiv Sena resenting publicly and senior BJP leaders has rushed to Uddhav Thackeray to mend the strained relations.