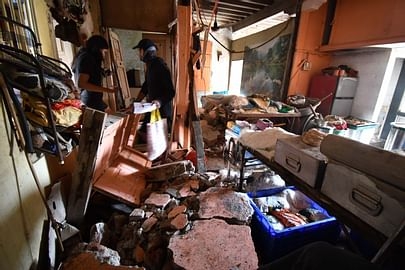 Senior BJP corporator in the BMC Prabhakar Shinde on Wednesday slammed Chief Uddhav Thackeray led state government for announcing financial aid of ₹2 lakh to the kins of those who were killed in the cylinder blast at Lalbaug on last Sunday and ₹50,000 to those who have sustained an injury in the incident. BJP corporators in the BMC have claimed that none of the other fire victims till date have received such financial aid.

Following the mishap on early Sunday morning that killed two and left 14 other with serious burn injuries, the Maharashtra Chief Minister Uddhav Thackeray on Tuesday announced ₹2 lakh each as assistance to the families of those who died in the Lalbaug gas cylinder explosion incident and to those injured in the incident will get Rs 50,000 from the CM's relief fund.

Total 16 people were injured after a cylinder exploded at around 7.18 am on Sunday during food preparation for a Haldi ceremony. First, one to die in the incident was 62-years-old Sushila Bangare, a neighbour. Bangare used to live alone, neighbours performed her last rites. The second deceased was identified as Karim, 50, (employed with the caterer), who had not only sustained burn injuries but also suffered a head injury.

Among those injured was the father of the bride and 15 other relatives. Ten people were said to be in critical condition, having sustained between 70-95 per cent burn injuries.

Shinde, a corporator from Mulund said that there have been so many fire incidents and cylinder blasts recently and even in the past, no financial aid was provided to victims then.

"The cylinder blast was a very unfortunate incident, however, there have been many such incidents none of those victims was provided with financial aid. Financial aid to victims of Ganesh Galli Lalbaug will be unfair to other victims.