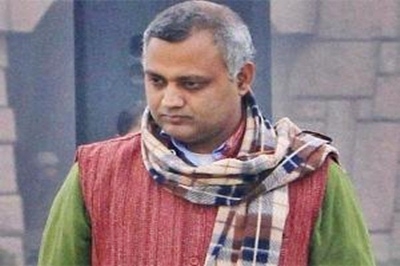 New Delhi :  Controversial AAP MLA Somnath Bharti, who has been evading arrest for nearly a week, surrendered before police on Monday night hours after the Supreme Court ordered him to give up by evening in the domestic violence and attempt to murder case filed by his wife.

Bharti, who was accompanied by his lawyers, reached the Dwarka North police station in his car at around 10.10 pm and made himself available to the police.

Wearing a red tee, Bharti flashed the Constitution of India (bare act) which he was carrying as a huge posse of media personnel mobbed his car. The FIR against the former Delhi Law Minister was registered at Dwarka North police station following a complaint by hsi wife Dipika Mitra.

“There was a warrant and I was availing legal remedies till the Honourable Supreme Court directed me to surrender. In compliance with the direction…I am here to surrender,” Bharti said, adding, “I was not running away from law. I was only availing the legal remedies guaranteed by the Constitution of India.”

Bharti had a tough time to get out of his car and no police personnel offered any assistance. “This too shall pass and truth shall prevail,” Bharti tweeted from an undisclosed location around an hour before he gave up.

A lawyer from Bharti said the legislator’s father was unwell and that is why he could not surrender by evening as directed by the apex court. Bharti was “avoiding” and not “evading” police, he added. Soon after Bharti failed to get relief from the Supreme Court, AAP cornered its Malviya Nagar MLA asking him to surrender “immediately” to avoid “further embarassment” to the party and himself. Chief Minister Arvind Kejriwal had also called his party colleague as an “embarassment”.

Bharti failed to get relief from the Supreme Court as it rejected his plea that he be given time till tomorrow to surrender..