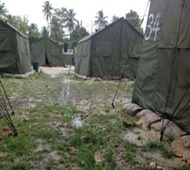 Washington: The United Nations Refugee Agency (UNHCR) has called for the immediate transfer of refugees and asylum seekers out of the Australian-run detention camps on both Manus Island and Nauru. A team from the UNHCR was in Nauru when Omid Masoumali, a young Iranian who died later in a Brisbane hospital, set himself on fire, reports ABC Online. Days later, a 21-year-old Somalian woman set herself alight and remains in a critical condition.