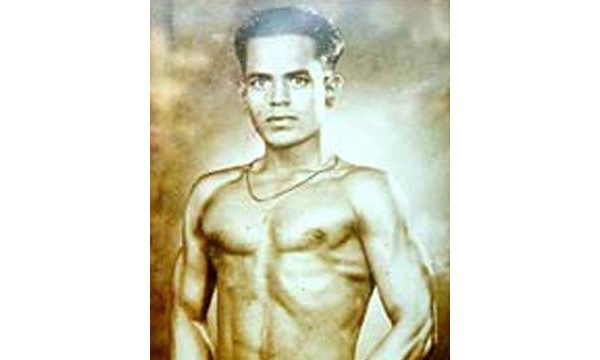 Khashaba Dadasaheb Jadhav is best known as a wrestler who won first individual bronze medal for India at the 1952 Summer Olympics in Helsinki. Since 1900 when Norman Pritchard won two silver medals in athletics, India had won gold medals only in field hockey, a team sport. He is the only Indian Olympic medalist to have never received a Padma Award too. Jadhav was fleet footed, which made him different from other wrestlers of his time.

Born in a village called Rethare Tal & District Satara in Maharashtra, KD Jadhav was the youngest of the five sons. His father Dadasaheb Jadhav was a renowned wrestler. At the age of 8, he defeated the local champion in just 2 minutes. That was the beginning of an undisputed champion of his area. He did his schooling in Tilak High School in Karad between 1940–1947.He grew up in a household that breathed and lived wrestling. His father Dadasaheb was a wrestling coach and he initiated Khashaba into wrestling at the age of five. His wrestling mentors in college were Baburao Balawde and Belapuri Guruji. Apart from the success in wrestling, he was good at studies too. He also participated in quit India movement. He resolved to unfurl the tri- color flag in Olympics on Independence Day August 15, 1947.

Starting his wrestling career in 1948, he first came into limelight at the 1948 London Olympics when he finished 6th in the flyweight category. He was the first Indian to achieve such a position in the individual category until 1948. Despite being new to mat wrestling and the international rules, Jadhav’s 6th-place finish was no less an achievement.

For the next four years, Jadhav trained even harder for the Helsinki Olympics. There he moved up one weight category and participated in the bantamweight (57 kg) which saw wrestlers from twenty-four different countries. He went on to defeat wrestlers from Mexico, Germany and Canada, but lost his semi-final bout. Then he came back stronger to win the bronze medal which made him the first ever individual Olympic medalist of independent India. Four years later, before the selection for Helsinki Olympics, Jadhav alleged that partial officials were responsible for him to not get selected. According to him, they intentionally gave him one point less than the eventual winner at the Madras (then) Nationals and he was ruled him out of the Olympics.

He then appealed to Maharaja of Patiala seeking justice, as the Maharaja loved sports. He saw his point and arranged his entry in Olympic trials where he floored his opponent and won an entry in the Olympics.

For the 1952 Games he and his family went around the village begging for contributions to enable him to reach to the Olympics. Barrister Balasaheb Khardekar, principal of the Rajaram College, where Jadhav studied, mortgaged his home for Rs 7,000 with the Maratha Bank in Kolhapur, to send his former student to the Olympics. Repeated requests to Morarji Desai, the then Chief Minister of Mumbai State for a financial aid of only Rs 4000 were of no help.

“He would have easily won the gold at Helsinki,” said Sampatrao Jadhav, his cousin who was with Khashababhau when he left for Helsinki to compete in the bantamweight category.”It was difficult for him to adjust to the mat surface. After two rolling fouls he missed out on the gold medal which was his for the taking. Moreover, there was no interval between the two bouts and to fight with two world class wrestlers without appropriate rest was more than a Herculean effort,” added Sampatrao. But an Olympic medal is an Olympic medal.

The victory procession at the Karad railway station was a see-it-to-believe. A 151 bullock cart procession on the beats of ‘dhols’- (drums) from the outskirts of Goleshwar to the Mahadeva temple (normally a 15 minute walk) took seven long hours and no one was complaining.

Jadhav had not forgotten Prof Dabholkar who mortgaged his own house to fund Jadhav. On his return, he organized a wrestling competition in which he took part himself. He won several bouts and handed over the prize money to the professor.

In 1955, he joined the police force as a sub-inspector where he won several competitions held within the department and also performed National duties as instructor. Despite serving for twenty-seven years and retiring as an Asst. Police Commissioner, Jadhav had to fight for pension. For years, he was neglected by the sports federation and had to live the final stages of his life in poverty. He died tragically in a road accident in 1984.

In 2010, a wrestling venue at the Indira Gandhi Sports Complex in New Delhi was named in Jadhav’s honor. He also received recognition in the form of awards finally, with Arjuna Award in 2001 being the most prominent.