Sushma fires at Gandhis in self-defence 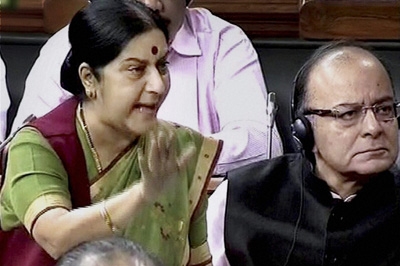 New Delhi : A combative Sushma Swaraj on Wednesday tried to turn the tables on the Congress first family by raking up the controversies over Ottavio Quattrochi and Warren Anderson while replying to the allegations levelled against her in the Lalitgate scandal during a much awaited debate in Lok Sabha. While Sushma’s fiery speech was centred on clearing herself of the charges, finance minister Arun Jaitley was focused on how the Congress-led UPA did not take any legally sustainable steps against Lalit Modi.

Using her oratorical skills to the maximum, the external affairs minister mocked at Rahul Gandhi saying he should ask his “mamma, how much money had been taken from Quattrochi” and “why did daddy get released the killer of 15,000 people”. The latter a clear reference to Warren Anderson of the Bhopal tragedy. Rahul had questioned Sushma Swaraj ‘how much money’ she and her family had received from Lalit Modi.

Swaraj, who was making a point to point rebuttal of all charges levelled by Congress leaders inside and outside Parliament claimed that her husband had never argued for Lalit Modi in the passport case. Her daughter, she claimed, was only the ninth junior in UU Lalit’s team appearing for Modi and thus not getting a single penny anyway. ”This is not quid pro quo. But Rajiv Gandhi allowed Anderson to escape in return for getting his friend Adil Shahryar released from jail in the US who was serving a 35 year sentence. ”This is quid pro quo”, she said emphatically.

Swaraj also targeted former Finance Minister P Chidambaram, saying he had failed to bring back Lalit Modi from United Kingdom as he did not try for his extradition as suggested by the host government and confined his requests to deportation.

“For four years, you (Congress government) did nothing. You remained inactive. There was no effort for extradition. You are asking me how he (Lalit Modi) got right of residency (in UK). He got it during your time. Whatever happened, it was during your tenure,” she told the Congress.

Likewise, on the conflict of interest charge, Swaraj reminded the Congress of Nalini Chidambaram, wife of P Chidambaram was a lawyer in the Sharda scam at the same time when he was finance minister.

”Shri Rahul Gandhi has accused me of helping Lalit Modi discreetly”, Swaraj said and then launched a tirade on how Bofors accused Ottavio Quattrochi had been allowed to escape overnight. ”This is working discreetly”, she argued.

On the issue of helping out Lalit Modi, Swaraj reiterated that she had only helped an ailing woman and never written for Modi’s travel documents to the UK authorities.

Taking a dig at the Congress leader for going on ‘sabbaticals’, Swaraj told him, “you are fond of going on sabbaticals of two months. When you go on such a visit next time, he should study your family’s history and on return ask questions to your ‘mamma’.

She said he should go through the “black deeds” and ask his “mamma” as to “how much money had been taken from Quattrocchi” and “why did ‘daddy’ (Rajiv Gandhi) get released the killer of 15,000 people (in Bhopal gas leak),” an apparent reference to Anderson.

Quoting an autobiography by late Arjun Singh, she said then Prime Minister Rajiv Gandhi had asked him, then Chief Minister of Madhya Pradesh, why Anderson was arrested in connection with Bhopal gas leak in 1984.

“Arjun Singh told him that as Chief Minister (of Madhya Pradesh) it was his duty towards the people,” Swaraj said.

Later, a Singh aide told him that a top Home Ministry official was putting pressure to grant Anderson bail. “He was sent to Delhi in a state plane and then allowed to leave for the US…it was done on the sly,” Swaraj said, adding she herself had done “nothing on the sly”.

She claimed facts later came out that Rajiv Gandhi’s friend Adil Shahriyar, facing a 35-year jail term,  was released by the US government as a ‘quid pro quo’ in return of Anderson’s freedom.

Swaraj said the man was released by a presidential pardon issued by then US President Ronald Regan on June 11, 1985, the day Gandhi reached the US.

She said Shahriyar was the son of close Gandhi family friend and diplomat Mohd Yunus. Attacking Chidambaram on the issue of ‘conflict of interest’, she said while there was no such issue involved in the Lalit Modi case, the former Finance Minister had admitted to it when his wife Nalini was made Income Tax Department’s Special Counsel.

“The department was under his ministry. He said he was not aware of the development till the time an AIADMK member in Rajya Sabha gave a notice in this regard to the Chairman,” she said. “He exonerated himself on his own from the allegations,” she said.

Continuing her attack on Chidambaram, she said TMC had brought to notice the issue of his wife accepting Rs one crore from Shardha scam accused Sudipto Sen. She said the file on the scam was being seen by Chidambaram.

On the issue of Chidambaram’s letters to the UK government on Lalit Modi’s deportation, she said the MEA was bypassed by the then Finance Minister.

Swaraj said she considers her political life as a ‘tapasya’ and would not do anything at this juncture of life to undo her efforts. “There is not an iota of allegation against me in the last 38 years of my political life,” she said.

*  I want to tell Rahul Gandhi – you love holidays. On your next one, read up on your family history and come back and ask ‘Momma, how much money did we get in the Quattrocchi case? Why did daddy let (1984 Bhopal Gas tragedy accused) Anderson go? Why the quid pro quo?”

* untry as a quid pro quo for the release of the son of a family friend Adil Shariyar.