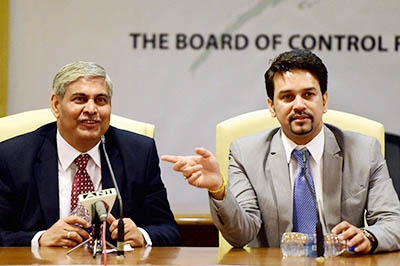 New Delhi : At long last, the Board for Control of Cricket in India has seen a regime change. As 58-year-old Nagpur born lawyer-turned-administrator Shashank Manohar unanimously stepped into the BCCI president’s post that fell vacant after the demise of the veteran Jagmohan Dalmiya curtains came down on the era of ICC chief N Srinivasan. Perhaps for the first time in recent years, he saw the futility of attending a meeting to elect the BCCI president and was not present as a representative of his home state, Tamil Nadu. His absence is a pointer to an end of his role in the BCCI affairs, and perhaps his term as the ICC chief and India’s representative in the international circuit.

Manohar’s election at the special general meeting in Mumbai on Sunday was a mere formality after it became known last week that he would be the only candidate in the fray with the blessings and support of Union finance minister Arun Jaitley, the entire Sharad Pawar group and the East Zone associations under their new leader former India skipper Saurav Ganguly.

Manohar who was the president till four years ago began his second knock aggressively batting on the front foot and announced a slew of reforms to restore the credibility of the game. A man with impeccable integrity and a hard task master, Manohar who does not use two of the modern gadgets – a mobile phone and wrist watch – set a two-month deadline for himself. “I am asking you to give me two months’ time, I have two years in office,” he told reporters at his first press conference in office.