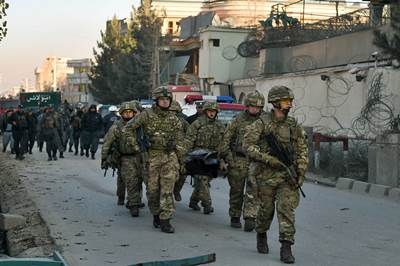 British solders from the NATO coalition carry the body of victim after a car bomb attack near the Spanish embassy compound in Kabul on December 12, 2015. At least four Afghan policemen and one Spaniard were killed in an hours-long Taliban siege near the Spanish embassy in Kabul that ended after all the attackers were killed, officials said. AFP PHOTO / Wakil Kohsar |

Kabul: At least four Afghan policemen and one Spaniard were killed in an hours-long Taliban siege near the Spanish embassy in Kabul, the latest high-profile insurgent attack. Multiple blasts and gunfire rocked Kabul’s diplomatic quarter after the brazen raid began yesterday, just hours after President Ashraf Ghani voiced optimism that a peace process with the Taliban would resume within weeks.

“Afghan special forces have killed four attackers who were involved in the terrorist attack in Kabul,” interior ministry spokesman Sediq Sediqqi told AFP. “Unfortunately four policemen were also martyred in the attack.” The government in Madrid had earlier confirmed that a Spanish policemen was also killed in the assault, which began when a huge car bomb struck during rush hour yesterday.

The powerful blast, which sent a thick plume of smoke into the sky, was followed by multiple explosions through the night along with sporadic bursts of gunfire. Security men near the embassy ducked from gunshots as they hauled away a limp body and two wounded men through the dark to a waiting ambulance — one bleeding from the head, the other a policeman with a gunshot wound to his leg — an AFP photographer saw.

Sediqqi told AFP the last of the four assailants was killed in the early hours today. The attack follows a deadly 27-hour Taliban siege of Kandahar airport this week as the militants ramp up attacks despite the onset of the harsh winter season, when the fighting usually calms down.

The Taliban also claimed responsibility for yesterday’s attack, saying the target was a foreign guest house. The Spanish embassy was earlier reported to be the target of the attack, but Spain’s Prime Minister Mariano Rajoy clarified that the assault was nearby and not on the compound.

“It was an attack against some guesthouses very near the embassy,” Rajoy said, confirming a Spanish policeman had been killed and all embassy staff had been evacuated as Afghan special forces cordoned off the area in Sherpur district in central Kabul.

Sherpur is home to several foreign NGOs and the residences of senior government officials, including controversial former warlord Abdul Rashid Dostum, Afghanistan’s first vice-president. The attack comes just days after president Ghani’s high-profile visit to Pakistan, where he shored up international support to restart peace talks with the Taliban.