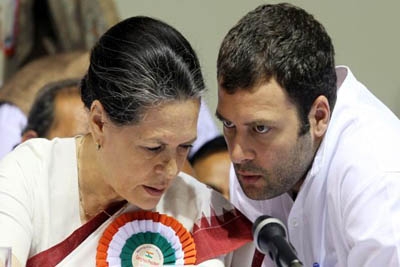 New Delhi :  Stung by the Congress” personal attack on Prime Minister Narendra Modi getting emotional about his mother during a US event, the BJP retorted with equal measure saying Congress had been ruined due to the love of Sonia Gandhi for her son Rahul.

BJP spokesman MJ Akbar reacted with unusual ire saying PM Modi was choked with emotion during the much-talked-about Facebook event because he was devoted to his mother. ”It seems the Congress has become the source of untruth, malice and utter frustration. PM is devoted to his mother, he touched her feet victory. In contrast to the Congress where a mother has ruined the party and was out to ruin the nation all due to her love for her inept son. It is this doting behaviour which has made Rahul the spoilt child of Indian politics”, Akbar caustically remarked. ”Instead of tweeting innocuous photos it might have been a better idea if the Congress Vice President explained what he was there unless of course enjoying an undeserved holiday,” Akbar taunted in response to Rahul photos about his Aspen conference.