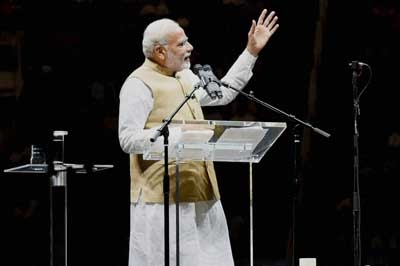 New Delhi:  For all his exertions over the last week in the United Nations and United States, the loudest message that reverberated back home from Prime Minister Narendra Modi’s speeches has been his targeting of the Gandhi family. At San Jose while addressing the Indian community, he said: “In our country it doesn”t take much for allegations to come up against politicians…This person made 50 crore, that son made 250 cr, that daughter made 500 crore, someone”s damaad (son-in-law) made 1000 crore…”

It is well known that Prime Minister Modi used the term ‘damaad’ as a short hand for his references to Congress president Sonia Gandhi’s son-in-law Robert Vadra and his controversial land deals. Taking the discourse further, he said: “Aren”t you sick of all of this? Aren”t you angry? My country-men, I am standing in your midst. Is there any allegation against me?

This has been a familiar pattern with Modi during his visits abroad and he has been regularly drawing fire from the opposition Congress for such speeches. The verbal clashes that follow between the spokespersons of the two parties have further embittered the domestic political discourse.

Congress spokesperson Anand Sharma said the speech is in poor taste.” It is condemnable that a Prime Minister indulges repeatedly in defaming those who have made enormous contributions in building this country. He has dragged the political narrative of India to a gutter level, by his I-me-myself approach and claims that nothing was done in country prior to his becoming the prime minister in May 2014,”said Sharma adding that it is disturbing to see that this great country has been represented by a showman.

However, the Congress critique of Modi”s conduct in the US was not restricted to the San Jose speech. Indeed, it went personal with the party raising questions about his statements that he sold tea as a child and that his mother became a housemaid to look after him. “True they were not rich, but they were not so poor that his mother had to work as a domestic help. They had a canteen in his childhood Modi used to manage the counter there and this is different from selling tea,” said Sharma.

The Congress also adversely commented on Modi getting emotional and breaking down while talking about his mother. “Is it not the duty of a son to look after the well-being of his mother? So, stop crying outside. Do your duty as a son and bring her to your house”, said the Congress spokesperson while pointing out that although Modi was the chief minister of Gujarat for 12 years he had not brought her to his home nor did he honour her by bringing her to his swearing-in ceremony as PM in New Delhi last year.

The Congress also targeted the PM on substantive issues like his claims about the size of the economy, the almost complete lack of media attention at the international level and the fact that compared to the Chinese president he did not receive the same quality attention like a state dinner from the White House. It also chided him for flaunting certificates issued by controversial media barons like Rupert Murdoch.