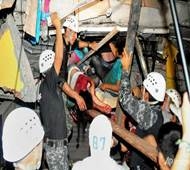 Pedernales (Ecuador): Rescuers and desperate families clawed through rubble, pulling out survivors two days after an earthquake that killed at least 413 people and devastated a tourist region of Ecuador.

Tearful relatives grabbed chunks of debris with their bare hands as they joined in the search for their loved ones along with stretched firefighting teams and mechanical diggers.

Among the stories of survival, authorities reported that one person was found alive today afternoon under the rubble of the El Gato hotel in Portoviejo.

Local media reported that a girl was rescued from the ruins of a building after being trapped for 20 hours in the hard-hit town of Pedernales, at the center of the quake.

Firefighters said on Twitter they pulled out three other survivors from rubble in the town of Manta.

The government raised the death toll of the 7.8-magnitude quake in the South American nation to 413.

“We are counting 413 people dead at present,” the country’s Security Ministry said today, updating the count from 350 earlier in the day.

At that time authorities said more than 2,000 people were injured. Foreign countries and organizations dispatched rescue teams to help search and medical units treat the injured, saying tens of thousands would need aid.

Rebuilding the destroyed areas will probably cost billions of dollars, President Rafael Correa said during a visit to Pedernales. Along the Pacific coast, in the towns of Pedernales, Manta and Portoviejo, the stench of rotting bodies filled the tropical air among heaps of rubble and twisted metal. Rescuers with sniffer dogs roamed the wreckage.

“My husband is under there,” said Veronica Paladines, 24, tearing at a mound of debris that used to be a hotel in Manta, with tears flooding down her cheeks.

Her 25-year-old spouse, Javier Sangucho, the father of their two young children, worked at the property as a painter. “He had just gone down to rest a bit when it happened,” his wife said.

A similar scene unfolded in Pedernales, where Laura Taco stood in front of the Royal Hotel, where her sister-in-law and niece were buried by the earthquake.

“We are desperate, but hopes are not lost, there are signs that beneath the rubble that people are alive,” she said.

Correa said on Sunday that the death toll would “certainly rise and probably in a considerable way” in the hours ahead. “There are still lots of bodies in the rubble,” he warned. “These are extremely difficult times, the biggest tragedy in the last 67 years.”

He was referring to an August 1949 earthquake near the central Ecuadoran city of Ambato that killed some 5,000 people. In Pedernales, Mayor Gabriel Alcivar estimated there were hundreds of dead buried under the rubble of collapsed hotels. Soldiers patrolled the beach town, and the Red Cross and the army opened a field hospital and a makeshift morgue at the local stadium.

“Here in Pedernales survivors have been rescued among the rubble and we are not losing hope that more will be found,” Ecuador’s Vice President Jorge Glas, who visited the town, siad. Foreigners killed by the quake included seven Colombians, two Canadians and at least one US national, officials said.

A Catholic missionary nun from Northern Ireland was killed along with three trainee nuns at a school, her religious congregation said. Although Ecuador frequently suffers seismic shudders because of its position on the Pacific Rim’s “Ring of Fire,” the weekend’s quake — which lasted a full minute — was the worst in nearly 40 years.

Since 1900 Ecuador has been rocked by seven earthquakes of magnitude 7.0 or higher in the region of Saturday’s quake, the US Geological Survey said. One in March 1987 killed about 1,000 people.

Sympathy and offers of help flowed in from around the world.

The United Nations refugee agency UNHCR said it was preparing to airlift supplies including hundreds of tents and kitchen sets as well as mosquito nets to protect people from the Zika virus. It said it aimed to provide shelter and aid to 40,000 people, including Colombian refugees settled in the area. The Spanish Red Cross estimated that up to 100,000 people would need assistance.

The World Bank said it had a credit line of USD 150 million ready to help with reconstruction.Correa’s government said it had access to USD 600 million in emergency credit overall.

But Correa said rebuilding “will take months and years and will cost hundreds of millions, and probably billions, of dollars.” (AFP)