Rahul is in Aspen, asserts his party 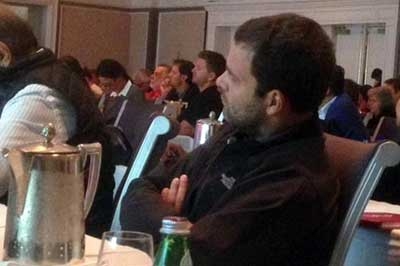 New Delhi :  In an obvious effort to blunt the Bharatiya Janata Party”s criticism that Congress vice-president Rahul Gandhi has been sent on ”forced vacation” by allies of the secular grand alliance in Bihar, and he is not out in USA attending some conference as claimed by the party, his team has now put out photos that show him at the conference and with other participating leaders.

”We have been maintaining this right from the beginning, and we have no need to tell any lies about our leader, The problem lies with the BJP that it is in the habit of making false claims, they should answer now,” said party spokesperson Anand Sharma as pictures showing Gandhi with Iceland”s President Olafur Ragnar Grimsson and British politician David Miliband were posted on the social media site twitter by Congress leader Milind Deora.

The controversy about Rahul”s ”second sabbatical” had surfaced a few days ago when Union minister Ravi Shankar Prasad made a statement that the BJP wanted to know the location of Congress vice president. The BJP spokespersons had dismissed the Congress” announcement that Rahul was attending a conference, claiming that the conference which he was supposed to attend in the US got over in July. It had charged the Congress with resorting to “falsehood to hide facts”, while claiming that the Bihar allies JD(U) and RJD wanted him out of the poll campaign.

Sharma added that the BJP should not worry so much about Rahul, but should explain to the people as to why their star campaigner Prime Minister Narendra Modi was spending ”precious time “in United States of America instead of campaigning in Bihar. ”We wonder why the BJP gets a fever even when Rahul as much as sneezes,” he quipped.