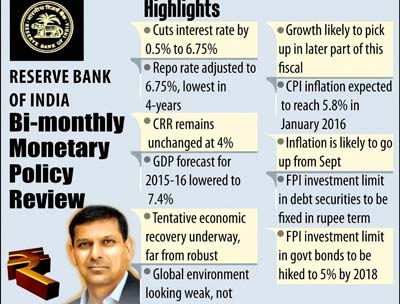 The rabbit he has pulled out of his hat essentially means cheaper personal and commercial credit, which is expected to help in turning the economy around.

The country’s largest lender, the SBI, immediately heeded Rajan’s pitch for passing on the benefit to consumers and said it will cut its base rate by 40 basis points effective October. A similar indication was given by the ICICI, Axis and other banks. The public sector Andhra Bank was first off the block, cutting interest rate by 0.25 per cent.

This will translate into lower housing, automobile and personal loan EMIs.

“I don’t think we have been excessively aggressive,” Rajan later told a news conference, explaining that the RBI had “front-loaded” the easing as there was widespread concern that India’s growth was losing momentum.

While there had been voices within the BJP government for the RBI to cut rates more aggressively, most analysts doubted whether Rajan had yielded to pressure, said a wire agency. Rajan gave the impression of being his own man when asked whether he felt like Santa Claus during the news conference. “My name is Raghuram Rajan, and I do what I do,” the governor responded in a remark that went viral on social media.

The governor also made some significant other announcements, which boosted the market sentiment. The limits for foreign funds’ investment in central government securities will be increased in phases to 5 percent of the outstanding stock by March 2018. This will create additional room for investment of Rs.1,200 billion, over and above the existing limit of Rs.1,535 billion.

This apart, Indian corporates will be permitted to issue rupee-denominated bonds with a minimum maturity of five years in overseas locations within the ceiling of foreign investment permitted in corporate debt — set at $51 billion at present.

The indexed reverse repo rate, or the interest payable by the central bank on short-term deposit, automatically stands reduced to 5.75 percent. There was no cut in the 4 percent cash reserve ratio that banks have to maintain in the form of liquid assets and designated government securities.

The markets were elated. The sensitive index of the Bombay Stock Exchange and Nifty of the National Stock Exchange, which had opened sharply lower on Tuesday morning, closed the day’s trade with gains of little over 0.60 percent each.

India Inc. was also elated by the unexpected quantum of rate cut. All three apex chambers — Assocham, FICCI and CII — welcomed the decision, but hoped commercial banks will transmit the policy decisions, lowering the cost of credit for them.

‘‘Markets have transmitted Reserve Bank’s past policy actions via commercial paper and corporate bonds, but banks have done so only to a limited extent,” Rajan said.

The RBI has cut its growth forecast for the fiscal year to 7.4 percent from 7.6 percent, predicted earlier, which is well below the government’s target of 8 to 8.5 percent, but still faster than that of China.

The central bank said it expects inflation to rise from August record low of 3.66 percent to 5.8 percent in January, just below its 6 percent target. It also set a new inflation target of around 5 percent by March 2017, and Rajan said the RBI would strive to keep real interest rates benchmarked to a 1-year Treasury bill rate of between 1.5 to 2 percent. – Agency compilation.