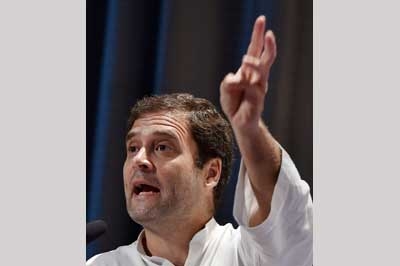 New Delhi : Congress vice-president Rahul Gandhi is expanding the range of his targets as he devotes more time to sprucing up his public speaking efforts.

After a youth Congress leader praised him sky high (in his absence, but such sycophancy reaches the right ears), Rahul sat among the NSUI workers for quite some time before delivering a scathing attack on the ideological mentor of the ruling BJP — the Rashtriya Swayamsewak Sangh.

” They want to run the country like a Sangh shakha. In the name of discipline they want to murder individuality. They want to bring the discipline of a ‘shakha’ in schools and colleges that allows no internal dialogue and thus destroys ‘our future.’ So, scientists do not want to be associated with institutions of higher learning,’’ Rahul said as he launched his first public attack on the RSS.

He reminded the gathering how the RSS cadres use the “German salute” of Hitler and asserted that Modi and the RSS were out to destroy India’s diversity, so that the only voice that gets to be heard is that of Modi, as if he alone knows everything.

As a counter offensive, he urged the NSUI activists to fan out in educational institutions and enlighten the students about the pitfalls of this ideology and the virtues of the Congress way of thinking. “There is always room for dissent in the Congress but in the Sangh only one man knows all,” he said.

Incidentally, on Wednesday former Prime Minister Manmohan Singh was uncharacteristically aggressive in his critique of the Modi government from the same platform. Indeed, it was after that attack from Singh that he had the now controversial meeting with Prime Minister Narendra Modi. Speaking from the same platform, Rahul picked up the thread and mocked Modi for taking lessons from the former prime minister on managing the economy. “In the morning, he criticized the prime minister, and then in the afternoon he was invited to an hour-long “pathshala” for giving ‘advice’ to the prime minister as he is not able to manage the economy,” the Congress Vice-President added.

Rahul said he would ask Dr Manmohan Singh, an economist of world repute, as to what he had taught Modi.”

Rahul also dubbed the prime minister’s “Make in India” programme as a big failure.” Nothing is going to come out of it as it is a big zero,” he added. (‘Zero niklega’).

He further taunted Modi for his claim of helping the poor. The PM went to France, US, Japan, China and even Mangolia, but he is still to visit a farmer’s house, Rahul said, harping on his favourite theme.