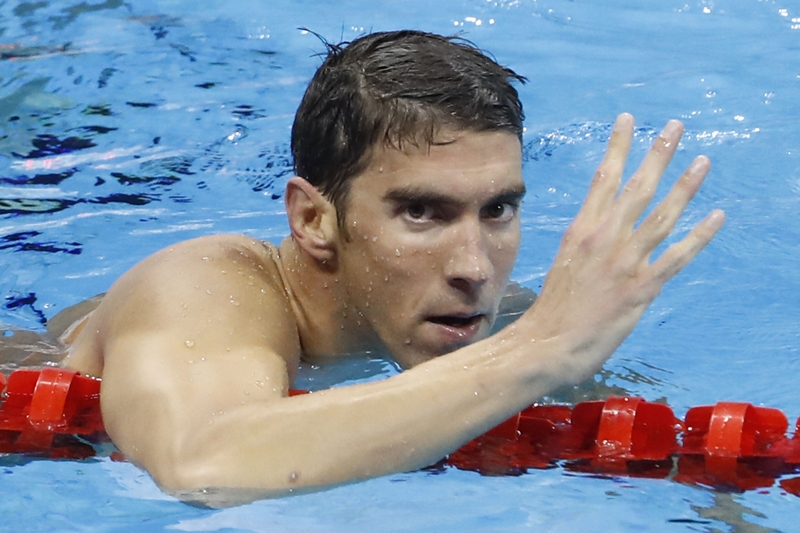 USA's Michael Phelps holds up four fingers for his fourth gold medal after he won the Men's 200m Individual Medley Final during the swimming event at the Rio 2016 Olympic Games at the Olympic Aquatics Stadium in Rio de Janeiro on August 11, 2016. / AFP PHOTO / Odd Andersen |

In what was billed as the final showdown between two of America’s greatest swimmers, Phelps blew away Lochte and everyone else to win his fourth gold medal of the Rio Olympics and 22nd overall with a victory in the 200-meter individual medley Thursday night.

Phelps finished a full body-length ahead of the field after dominating the breaststroke and freestyle legs, finishing in 1 minute, 54.66 seconds.

He’s got 13 individual golds and 26 medals overall. “I don’t know how to wrap my head around that,” Phelps said. “It’s been a hell of a career.” That’s an understatement.

A 12-time Olympic medalist, Lochte had settled for two silvers and a bronze behind Phelps at the last three Olympics in this event.

This time, he didn’t even make the podium. Leading at the midway point, Lochte faded to fifth â€” nearly 3 seconds behind the winner. “We bring out the best in each other,” he said. “I was a little bummed about my performance, but I was happy for him to get a gold and get one for Team USA.” Japan’s Kosuke Hagino took the silver, while China’s Wang Shun claimed the bronze. But Phelps was in a league of his own.

As usual, He’s got one more individual event at what he insists will really be his final Olympics remember, he already retired once â€” and will be looking to add a fourth straight gold in the 100 butterfly to his staggering resume. Then, he’ll close out these Olympics in the 4×100 medley relay. There seems little doubt he’ll go six-for-six. “I’ve been able to kind of finish how I wanted to,” Phelps said.

It was quite a night for the powerful American team, which picked up two more golds. Ryan Murphy completed a sweep of the men’s backstroke events in the 200, but the most socially significant triumph was Simone Manuel tying 16-year-old Canadian Penny Oleksiak for the top spot in the 100 freestyle.

With the shared win, Manuel became the first African-American woman to capture gold in swimming.

Her fingernails painted red, white and blue, Manuel broke down in tears after her landmark victory in a sport that still struggles to attract people of color.

“I think that this win helps bring hope and change to some of the issues that are going on in the world,” Manuel said. “But, I mean, I went out there and swam as fast as I could and my color just comes with the territory.” Manuel and Oleksiak the first athlete born in this century to win a gold medal in any Olympic sport stunned world-record holder Cate Campbell.