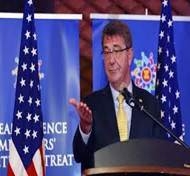 Aboard The USS John C Stennis US Defence Secretary Ashton Carter visited a warship close to flashpoint waters of the South China Sea today, as Beijing reacted defiantly to an American military build-up in the area.

Carter’s trip to the USS John C Stennis was the latest effort by the US to show its commitment to maintaining security in the hotly contested waters, where China has rattled nerves by building artificial islands on islets and reefs claimed by some if its Southeast Asian neighbours.

Before flying from Manila to visit the warship, Carter emphasised the United States would support the Philippines and other allies as they faced “coercion and intimidation”.

“We will continue to stand up for our safety and freedoms, for those of our friends and allies, and for the values, principles, and rules-based order that has benefited so many for so long,” Carter said at a closing ceremony for annual US-Philippine war games.

The roughly two-hour visit to the Stennis came after Carter announced on Thursday that the United States had launched joint naval patrols with the Philippines in the sea, as he spoke of growing concern about China’s “land reclamation” and “militarisation” of the region.

He also said the United States would deploy hundreds of troops, as well as warplanes, to the Philippines.

China claims nearly all of the strategically vital sea, even waters close to its Southeast Asian neighbours, and has in recent years built the islands in an effort to assert what it insists are its sovereign rights.

The Philippines, Vietnam, Malaysia, Brunei and Taiwan also have overlapping claims to parts of the sea, which is home to some of the world’s most important shipping lanes and is believed to sit atop vast oil reserves.

China has constructed the islands on reefs in the Spratlys archipelago, which are close to the Philippines and Malaysia, as well as airstrips capable of accommodating military aircraft.

Carter visited the Stennis, along with an AFP reporter and other journalists, after making a short flight to the carrier from a military base on the southwestern Philippine island of Palawan, which is the closest landmass to the Spratlys. (AFP)