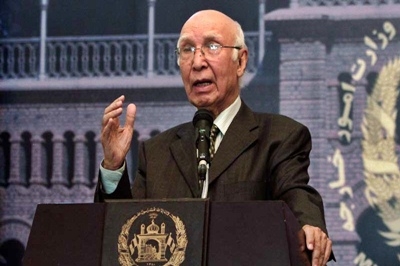 Islamabad: Pakistan’s top diplomat today said that his country will support all endeavours aimed at strengthening peace and security in Afghanistan as instability in the war-torn neighbouring nation is not in its interest.

Prime Minister’s Advisor on Foreign Affairs Sartaj Aziz made the remarks while addressing the senior officials prior to Ministerial Heart of Asia Conference here, which is jointly hosted by Pakistan and Afghanistan.

He said Pakistan will continue to support all endeavours aimed at strengthening peace and security in Afghanistan, Radio Pakistan reported.

Aziz stressed that Heart of Asia Conference is an effective platform for promoting regional economic cooperation and connectivity, with Afghanistan at its centre.

He said it provides an opportunity to member countries in result-oriented engagements for a peaceful and stable Afghanistan, and a secure and prosperous region as a whole.

Aziz said since the launching of Heart of Asia conference in 2011, the forum has made good progress towards realisation of its core objective of promoting durable peace and stability in the war-torn nation.

He said the key achievements include political consultation involving Afghanistan and its neighbours and the regional countries with a view to promoting mutual trust in the areas of security and economic interaction.

He said the confidence building measures identified in the Istanbul process document are leading to enhanced regional engagement and cooperation of the Heart Asia countries with Afghanistan in areas of trade and economic, energy, counter terrorism, narcotics, disaster management, regional infrastructure and education.

Aziz said as the heart of Asia process is maturing, our focus should be on strengthening engagements and collaboration to effectively combat the formidable challenges facing the region in the field of security as well as promoting regional economic collaboration.

He said the theme of the conference ‘Enhanced cooperation for countering security threats and promoting connectivity in the Heart of Asia’ is pertinent to the needs of our region.

Afghan Deputy Foreign Minister Hikmat Khalil Karzai in his address called for a united and collective approach to counter the menace of terrorism and violent extremism.

Karzai said the conference is taking place at a critical juncture when the region is confronted by many challenges. He said the activities of terror outfits including Daesh or ISIS once again reminds of the gravity of the problem and demands a collective approach to tackle this international phenomenon.

Asserting that Afghanistan is determined to continue fight against terrorism in all its forms and manifestations, Karzai said peaceful and stable Afghanistan is in the best interest of the region.

He said his country attaches importance to have strong relations with all the regional countries for promotion of
economic relations and meet the challenges.