Ohio official: No decision yet on charges in gorilla case 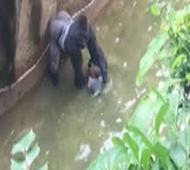 Cincinnati (US): No decision has been made yet on whether charges will be brought against the parents of a 3-year-old boy who fell into a gorilla enclosure at the Cincinnati Zoo, causing an animal response team to shoot and kill the primate, authorities said. Cincinnati city spokesman Rocky Merz said yesterday no determination has been made on possible charges nor has anything related to the case been released by city or county departments.

Merz said an investigation into the incident Saturday at the zoo is ongoing and that Hamilton County Prosecutor Joe Deters will review the case. Meanwhile, 911 tapes released yesterday by Cincinnati police reveal the confusion and panic in the moments when the boy plunged into the zoo’s gorilla exhibit.

“He’s dragging my son! I can’t watch this!” a woman, who isn’t identified, says in the 911 call on Saturday. As she pleads for help, she shouts at her son repeatedly:
“Be calm!” The zoo’s dangerous animal response team shot and killed the gorilla within 10 minutes to protect the boy after he dropped some 15 feet into the exhibit.

The boy’s family isn’t commenting on the police investigation, but they released a statement saying he continues to do well and expressed gratitude to the Cincinnati
Zoo for protecting his life. The child’s mother said in the 911 call that her son had fallen into the gorilla exhibit and a male gorilla was standing over him. The dispatcher told her that responders were on their way, and she yelled four times: “Be calm!”

Another woman is heard telling bystanders to keep quiet so they didn’t scare the gorilla. “You’re going to make him riled up. You’re riling him up,” the woman said.

A record of police calls shows nine minutes passed between the first emergency call about the boy falling into the enclosure and when the child was safe.

Since then, there have been numerous questions about the how the child got past the barriers around the exhibit. The zoo says it will look at whether it needs to reinforce the barriers even though it considers the enclosure more secure than what’s required.

A federal inspection less than two months ago found no problems with the gorilla exhibit, but earlier inspections reported issues including the potential danger to the public from a March incident involving wandering polar bears inside a behind-the-scenes service hallway.

Yesterday, the boy’s family said he had a checkup by his doctor and “is still doing well.” The family said they continue to “praise God” and also are thankful to the zoo “for their actions taken to protect our child.