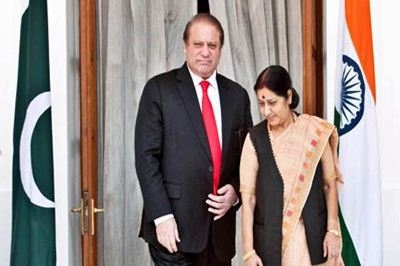 The two-day ‘Heart of Asia’ conference, an annual gathering of Asian and other countries, with focus on
Afghanistan began today where Swaraj will represent India at the ministerial-level meeting tomorrow.

In the meeting, the National Security Advisor briefed about his recent talks with his Indian counterpart Ajit Doval in Bangkok, in which the foreign secretaries of both the countries were also present, the statement said.

The agenda of the fifth ‘Heart of Asia’ conference, hosted by Pakistan with focus on Afghanistan, also came under discussion during the meeting.

Afghan President Ashraf Ghani’s visit to Pakistan was also discussed in the meeting.

After chairing the meeting, Sharif held one-to-one talks with the army chief to discuss security issues.

The powerful army controls the security policy and analysts say its consent is key to exploring improvement of ties with India and Afghanistan.

The ‘Heart of Asia’ conference provides an occasion for leaders of Pakistan, India and Afghanistan to discuss regional issues during the conference and some of contentious bilateral problems on the sidelines.

The conference is aimed at enhancing cooperation for countering security threats and promoting connectivity in the region.

The high-ranking delegations from 14 participating states, 17 supporting countries and 12 international and
regional organisations are participating in the conference.