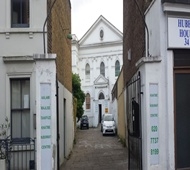 London: Leaflets, authored by former chief of a Pakistan-based extremist Islamic group, calling for the killing of members of minority Ahmadi Muslims have been found in a south London mosque, according to a media report. The leaflets demanding death for heretics were distributed to worshippers at the Stockwell Green mosque, which was being used by Khatm-e-Nubuwwat (KN) extremist group which targets Ahmadi Muslims, the BBC discovered.

Authored by Yusuf Ludhianvi and written in English, the leaflets were also found arranged in piles on a desk next to a shoe-rack, the usual place to display literature in mosques.The group held its annual conference at the mosque last year and gave that address on website as its overseas office.

The leaflets called Ahmadis “apostates” and said that “they deserved to die”. A mosque trustee said he had never seen the leaflets before and suggested they were fake or left there maliciously. “We have not published any pamphlet of that kind. This is nothing to do with our mosque. Someone might have put it there and taken from there with malicious intentions,” said Toaha Qureshi, a trustee in the mosque.

Referring to sectarian attacks on Ahmadis in Pakistan, he said, “Whatever happened in Pakistan, that has got nothing to do with me or with the Stockwell mosque. What we are saying is Stockwell mosque is an independent organisation. It does not take a dictation by anybody else.”

The constitution of Pakistan bans members of the Ahmadi sect from referring to themselves as Muslims. Khatm-e-Nubuwwat has never been implicated in an attack
but has been criticised by Human Rights Watch for encouraging violence towards members of the minority sect. The killing of an Ahmadi shopkeeper Asad Shah in Glasgow last month was described by police as “religiously prejudiced”.

Tanveer Ahmed, the 32-year-old who is accused of his murder, said he killed Shah because he allegedly disrespected Islam.