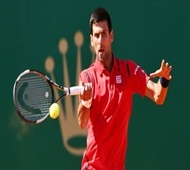 Monte Carlo: Czech Jiri Vesely surprised Serbian World No.1 Novak Djokovic 6-4, 2-6, 6-4 in the second round of the Monte Carlo tennis Masters. The 5th-ranked Vesely took 125 minutes to defeat the defending champion on clay court here on Wednesday, which still remains a weakness for Djokovic, reports Tass.

It is only Djokovic’s second loss of the season and his earliest defeat on the tennis tour in three years, since losing in the second round of the Mutua Madrid Open against Grigor Dimitrov. Vesely goes on to face Paolo Lorenzi or Gael Monfils.

Djokovic’s loss left him disappointed, but the Serbian also had to nod to Czech Jiri Vesely, who earned the biggest win of his career by knocking off the two-time Monte-Carlo champion.

“He played very solid. He was serving very big. He was playing tactically good and aggressive,” Djokovic said after the match. “When he was a break up in the third set, he was playing bravely. He was coming in, (hitting) drop shots, big serves. He was going for it. He deserved to have it.”

“I have to congratulate the better player today on the court and just move on from there,” Djokovic added. “It is what it is. Sometimes you don’t play your best and you lose.”