Goa means beaches and revelry. Some other time, I said. Knowing me a history buff, Goa Tourism sent me a rejoinder – ‘There is a 400 year old grandiose church upon a hill in an island partly inhabited with descendants of Portuguese settlers’. The bait worked fine and I was hooked. Within a week, I made a dash to behold the history of Divar.

From Dabolim Airport, I reached my hotel, Miramar Residency in the city’s central location Panjim, run by Goa Tourism Development Corporation Ltd. After a quick lunch, I headed straight to the island, the ferry jetty being 9.5 kms away. There are no bridges connecting the island, however regular ferry services operate and several vehicles can be accommodated at a time.  To my utter dismay, de ja vu hit me! Around nine to ten years back, on my first visit to Goa, I’d taken fancy at this very island and I had even set my foot on it. But I had retreated on being told it to be a humdrum village. Quite indeed, this island bears a smothered history, stashed away even from the residents of the island.

Divar is a triangular river island sitting upon the river Mandovi, standing third largest of the seven islands of Goa, 5.8 km in length and averages to 3 km in width. From the Goan mainland, Divar appears a floating salver of mangroves hugging the river.  As early in 1596, Dutch geographer Linschoten had mapped this island of Divar. Our ferry carrying us in the car landed on the island. 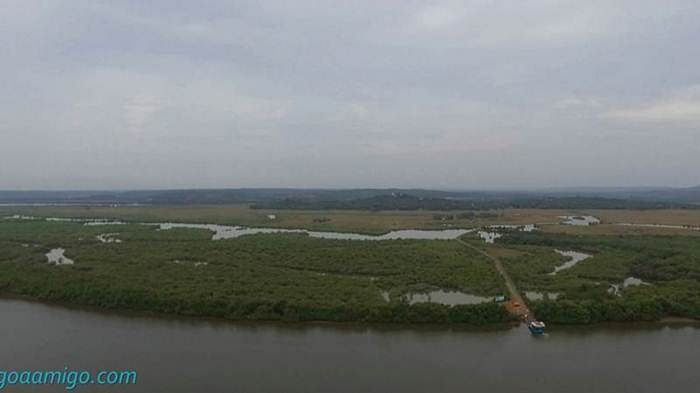 Divar is a low-lying island of swamps but has an illustrious history of ancient Hindu pilgrimage and learning centre, Portuguese bastion and also remained a cynosure during the Muslim rule. Goa remained the entrepot for both traders and invaders. Till 1510, there was flourishing Hindu civilization. The island’s very name, Divar literally meant a land of temples’ being a centre of pilgrimage in the entire Konkan. The Portuguese and Muslim rulers followed demolition of temples out of their iconoclastic fury.

Alfonso de Albuquerque had taken over Divar in 1510 in the initial phase of conquests, velhas conquistas of Goa Dourada, the Golden Goa and remained under Estado da India, under Portuguese occupation till 1961 for 451 years. Despite being a swampy island, Divar was always in the forefront of political developments in Goa. 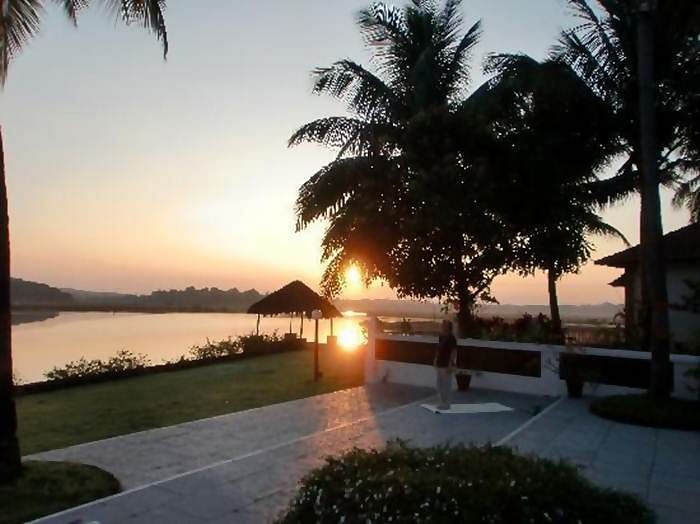 After a little drive in the island, we reached the first and the biggest village Narvelim, also called Piedade in Portuguese. Here we found a hill of 43m height and on moving up, the baroque church popped up on the top. Igreja da Nossa Senhora da Piedade or Our Lady of Piety Church was built from 1700 to 1724 as an improved version of the Santana Church in Old Goa, though this one being smaller in size, both built by Msgr Frias. The hilltop offers imposing view of the Mandovi River and the adjoining islands.

Father Jose Dias head of the church pointed out, ‘It’s an elegant piece of Indian baroque architecture in the Mannerist style.’ The father proficient in Portuguese showed me old books and paintings. I saw the sealed treasury that I was told is worth to be put up in a museum. Jose Albuquerque,  mentions in his book on Divar, ‘The churches built in Goa during the first centuries of Portuguese rule, were planned to merge symmetrically the features of Renaissance motifs, with those of Hindu and Muslim traditions, while adding a modicum of Jain art motifs.’

On reaching the bottom of the hill, I found an old gentleman, doing his evening walk. I sprang upon him. Alban Menzes was cordial and answered my questions and offered to show a nearby chapel, having Christ’s statue linked with miracles.  It is called Chapel of Our Lord the Redeemer erected in 1865.

We found Jose F.F.de Albuquerque in his mansion of olde-worlde opulence. He retired as the chief engineer of Public Works Department of Goa and thereafter he has been fervently pursuing historic research of Divar based upon the documentation in Portuguese left behind by his father, a Portuguese teacher in the village school. His library has collections of Indo-Portuguese books spanning three-generations. 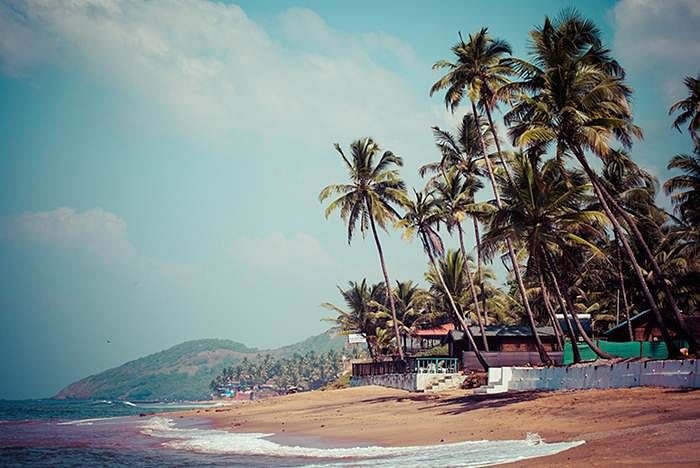 Lord Saptkoteshwar was the deity of the then ruling Kadambas whose rule got scuttled with the Portuguese invasion. Kadamba queen Kamaladevi had founded Saptakoteshwar Temple in the 12th century. The temple was destroyed several times and finally relocated at the present site under instructions from Chhatrapati Shivaji in 1668 when he had come to pray here. A little away stands the Naroa Fort. To go to the village of Naroa, one needs to take a ferry again. It lies 17 kms from Panjim and 5 kms from Bicholim.

There are several old churches and chapels and temples on the island.  In the village of S. Matthias now also called Malar lies Igreja de Sao Matias erected in 1591. Indo-Portuguese architecture of old-charm houses can still be seen in Piedade village. Till, this day, the inhabitants are against a bridge as they want the island to retain its insularity. There is no crime and so there is no police station even. 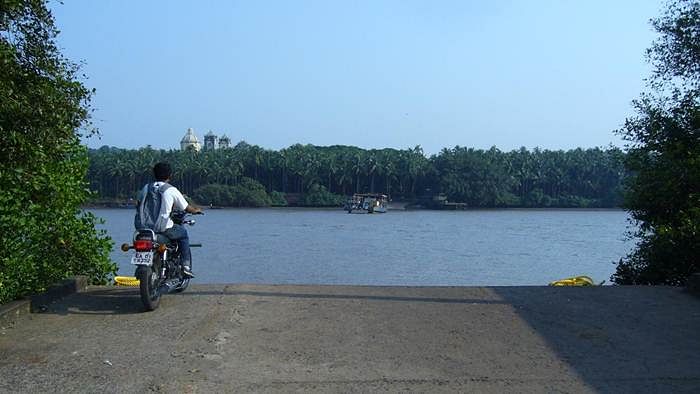 I learnt – Goa spills over from adventure sports, history and then to eco-tourism! Peals of stashed away histories remain swathed in bio-diversity rolling with time.