Comets break up, make up throughout their lives 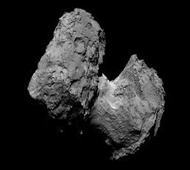 New York: Some periodic comets — objects that orbit the Sun in 200 years or less — may regularly split in two and then reunite down the road, a new study has found. According to a team from Purdue University and University of Colorado Boulder (CU-Boulder), this may be a repeating process fundamental to comet evolution.

In order to reconstruct the past life of 67P, the team used numerical models in which the spin rate was cranked up from its roughly one rotation every 12 hours today to one rotation every seven to nine hours. The models showed the faster spin would lead to more stress and the formation of two similar cracks on the neck of 67P in the same location.

“Our spin analysis predicted exactly where these cracks would form,” Scheeres said, adding that “we now have a new understanding of how some comets may evolve over time”.

The models run by the team showed that if 67P’s spin is increased to less than seven hours per rotation, the head will pop off. “The head and body aren’t going to be able to escape from each other,” he said.

“They will begin orbiting each other, and in weeks, days or even hours they will come together again during a slow collision, creating a new comet nucleus configuration,” Scheeres noted. This pattern could go on for the life of the comet, said Scheeres in a paper published in the journal Nature.