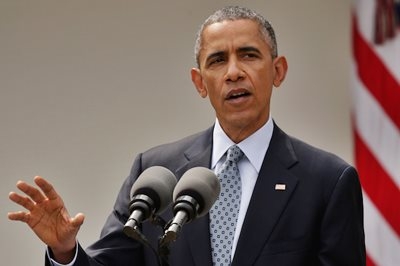 Washington:  Citing backing of nations like India and China that helped bring Iran to the negotiating table, President Barack Obama warned lawmakers they risked damaging American credibility if they vote to kill the Iran nuclear deal.

“Let’s not mince words: The choice we face is ultimately between diplomacy and some sort of war – maybe not tomorrow, maybe not three months from now, but soon,” Obama said in a speech at American University Wednesday. “How can we in good conscience justify war before we’ve tested a diplomatic agreement that achieves our objectives?” he asked. Obama asserted that it was “our very willingness to negotiate that helped America rally the world to our cause, and secured international participation in an unprecedented framework of commercial and financial sanctions.” “Keep in mind unilateral US sanctions against Iran had been in place for decades, but had failed to pressure Iran to the negotiating table.” “What made our new approach more effective was our ability to draw upon new UN Security Council resolutions, combining strong enforcement with voluntary agreements from nations like China and India, Japan and South Korea to reduce their purchases of Iranian oil, as well as the imposition by our European allies of a total oil embargo,” he said.

“Winning this global buy-in was not easy-I know.  I was there,” Obama said noting, “In some cases, our partners lost billions of dollars in trade because of their decision to cooperate.” “But we were able to convince them that absent a diplomatic resolution, the result could be war, with major disruptions to the global economy, and even greater instability in the Middle East,” he said. “In other words, it was diplomacy-hard, painstaking diplomacy-not sabre-rattling, not tough talk that ratcheted up the pressure on Iran.”

Using two points in history to underscore his argument-John F.  Kennedy’s push for diplomacy with the Soviet Union and the vote to invade Iraq in 2002 — Obama warned that US global standing was at stake. “If Congress kills this deal, we will lose more than just constraints on Iran’s nuclear programme or the sanctions we have painstakingly built,” Obama said. “We will have lost something more precious: America’s credibility as a leader of diplomacy. America’s credibility as the anchor of the international system.”The decision facing lawmakers next month as they review the Iran deal is the most significant since Congress voted to invade Iraq more than a decade ago, Obama said.