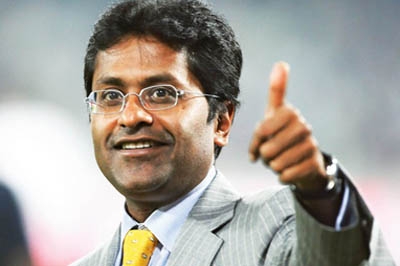 New Delhi: The CBI has sent documents related to former IPL boss Lalit Modi, being probed for alleged money laundering in conduct of the T-20 cricket tournament, to Interpol for issuance of a Red Corner Notice against him. “All necessary documents in the case being probed by Enforcement Directorate (ED) has been sent to the Interpol for issuance of the notice,” official sources said.

The move came after a Mumbai Court recently issued a non-bailable warrant against the former IPL Commissioner. The ED has sought Interpol’s help as domestic legal options available to it for serving its summons to Modi issued under Prevention of Money Laundering Act (PMLA) failed. After his lawyer in Mumbai refused to accept the summons, contending he was not authorised for it, the ED had e-mailed it to the former IPL honcho, who has made London his home, but elicited no response from him.

CBI is the nodal agency for Interpol-related affairs in India. The Red Corner Notice is issued “to seek the location and arrest of wanted persons with a view to extradition or similar lawful action” in a criminal case probe. Once the red corner notice has been issued, the Interpol seeks to arrest the person concerned in any part of the world and notifies that country to take his or her custody for further action at their end.

Sources said the ED is also mulling to seek Modi’s extradition by sending a request to the Ministry of External Affairs through the Home Ministry. The ED is probing Modi, the Indian Premier League (IPL) and its executives for alleged violation of anti-money laundering laws after registering a criminal FIR in 2012. The FIR was filed after the Central agency took cognizance of a cheating complaint filed by former BCCI chief N Srinivasan against Modi and half a dozen others with the Chennai police.

The ED subsequently invoked PMLA along with sections 420 (cheating) and 120-B (criminal conspiracy) of the IPC to probe if BCCI-IPL and the exchequer had been cheated in the award of telecast rights for the T20 tournament in 2009.

The case relates to a 2008 deal between World Sports Group (WSG) and Multi Screen Media (MSM) for television rights of Indian Premier League (IPL) worth Rs 425 crore. In 2008, BCCI had awarded media rights for ten years to WSG for USD 918 million. WSG entered into a deal with MSM to make Sony the official broadcaster. The contract was replaced a year later with a nine-year deal where MSM paid US $1.63 billion. The ED started a probe in 2009 under Foreign Exchange Management Act (FEMA) to investigate whether payment of Rs 425 crore facilitation fee by MSM Singapore to WSG Mauritius was made illegally.

It is also probing 16 foreign exchange violation cases vis-a-vis IPL, Modi and others. The most important of the cases is the one related to media rights deal in which the agency slapped show-cause notices against Modi and 13 others in February this year.

The ED, in its notice, has accused Modi of sending “fraud” emails and being a suspect beneficiary of Rs 125 crore illegal funds in connection with the Rs 425 crore deal for grant of media rights of the T-20 tournament.