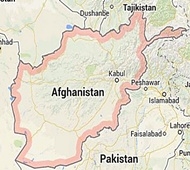 Kabul: An Afghan official says at least one person has been killed when a bomb ripped through a bus carrying education ministry employees to work in the capital, Kabul. Spokesman Sediq Sediqqi of the Interior Ministry says five people were wounded in today’s blast. He says the explosion was caused by a magnetic bomb attached to the bus. Rahim Gul, the assistant driver on the bus, gave a higher toll. He told The Associated Press that two employees were killed.

No group immediately claimed responsibility for the attack. The Taliban frequently use roadside and so-called sticky bombs, as well as suicide attacks against Afghan security forces and government employees across the country. Such bombings regularly take place Kabul, though the Afghan capital has not seen a major attack in some months.