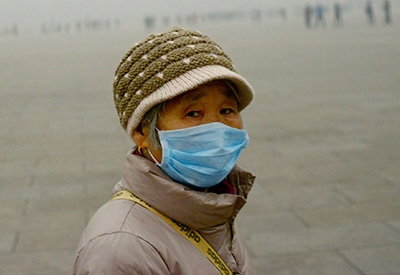 An elderly woman wearing a mask looks on as she visits Tiananmen Square during heavy pollution in Beijing on December 1, 2015. Beijing ordered hundreds of factories to shut and allowed children to skip school as choking smog reached over 25 times safe levels on December 1, casting a cloud over China's participation in Paris climate talks. AFP PHOTO / WANG ZHAO |

Beijing: Half of smog-hit Beijing’s 5.5 million private cars were today kept off the roads, with the Chinese capital enforcing its first-ever red alert for pollution as air in the city of over 22 million people turned “hazardous” and schools and construction sites remained shut. Beijing’s air this morning turned from “very unhealthy” to “hazardous” as PM 2.5 – particulate matter with size equal to or less than 2.5 micron and the main gauge to identify pollutant particles in the air – touched 365 compared to yesterday’s 256 level.

A grey haze hung over the city at a time when crucial climate talks have entered their final phase in Paris. According to the Beijing Municipal Environmental Monitoring Centre, heavy smog will linger until Thursday. It is expected to disperse on Thursday afternoon as a cold front arrives.

Under the red alert, the highest in the four-tier emergency response system created in 2013, all schools have been ordered to be closed, and outdoor construction halted. The red alert, Beijing’s first ever, was issued yesterday will last from 7 am today to noon on Thursday. Officials have also clamped restrictions on factories and traffic. The reading of the PM 2.5 the Particulate matter in the air at the US Embassy Beijing Air Quality Monitor showed 365 this morning.

According to the US embassy classification, anything beyond 300 is categorised ‘hazardous’, warranting people to take preventive measures like avoiding outdoor exposure. Car use will be limited during the red alert period as cars are allowed on the roads on alternating days depending on the odd or even numbers of their license plates.

In addition, 30 per cent of government cars will be banned from streets on an odd/even basis. The restriction of car use is expected to push an extra two million passengers onto public transport per day.

Beijing will add 21,000 to 25,000 buses, including 8,182 clean-energy buses, to the roads from today, officials said. Few students showed up at the Beijing No. 2 Experimental Primary School as the school sent out text messages giving them the choice of either staying home or coming to school.

He Jinglong, a physical education teacher of the affiliated school of Beijing Jiaotong University, led students in indoor exercise yesterday. “We designed a set of exercises specially for smoggy weather to keep students fit,” He was quoted as saying by state-run Xinhua news agency.

The air quality in Beijing in every winter suffers as the city operates dozens of massive coal fired heaters to keep millions of homes warm, but add to the industrial, vehicular pollution besides burning of agricultural waste in the outskirts.