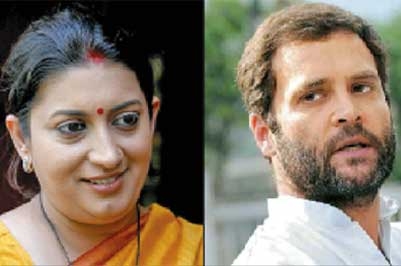 New Delhi :  A day after Congress vice-president Rahul Gandhi launched a strong attack on the Modi government for trying to run the country like a RSS shakha, one of country’s most prestigious institutes of higher learning — the Indian Institute of Technology (Madras) — banned a student body, the Ambedkar Periyar Study Circle, for ‘flouting’ the institute’s guidelines. However, this was a thin disguise for the real reason — the APSC had circulated a pamphlet that was critical of the Modi Sarkar.

The decision with heavy political overtones in faraway Chennai fanned political fires in the capital and there was a full scale war of words between the union human resource development minister Smriti Irani and the Congress vice-president Rahul Gandhi. In statements exchanged on the micro blogging site twitter, the two sides spared no punches.

Irani’s hidden hand is seen behind the decision of the IIT-M authorities to ban the student group following an ‘anonymous’ complaint, that all but reveals the ‘shakha’ style of functioning. Gandhi said two things. His first comment was: “IIT student group banned for criticizing Modi Government. What next?”

And then he followed it up with: “Free speech is our right. We will fight any attempt to crush dissent and debate.”

Irani joined the battle without any delay and charged Rahul with not being able to “fight his own battles and hiding behind the NSUI”. “Yesterday u told NSUI to create disorder where there is order. Today your goons come to my house when I’m away at work,” Irani tweeted, referring to Gandhi’s address at a NSUI rally where he urged student leaders to take up their fight against the RSS to educational institutions wherever it is imposing its ideology.

She also dared him to debate any issue of governance, including education.

“Give me a time n place n I’m ready to debate everything…” she said. Irani and Gandhi have a rivalry dating back to the last Lok Sabha elctions where she unsuccessfully challenged the Congress vice-president in his home turf Amethi. The battle has been continuing and the last issue was the Amethi food park that has been shut down by the Modi Sarkar.

But in this case, the issue is getting support from different parties and even the Aam Aadmi party spokesperson Ashutosh lashed out at the Modi government for banning a study circle on the basis of an anonymous complaint. “So, do we expect that the students shall only sing praises of the prime minister,” he quipped.

The personal battle with Irani was taken up by the NSUI president Roji John who slammed her for describing the activists of the students’ organisation as ‘goons’. “For someone like her who knows nothing about educational institutions and student movements, I would like to point out that India’s independence was won on the shoulders of the student and youth movement. She needs to issue a public apology for calling student activists, ‘goons’, it is an insult to the student community of the country,” said Roji.

Officially the government claims that the IIT is an autonomous body and has its own procedures, but the protest against this kind of interference has been on for quite some time. In April, a group of Parliamentarians wrote to President Pranab Mukherjee expressing their concern over RSS influence in educational institutions.

“The role of the HRD ministry and its minister is to lay down broad policy and to ensure adequate funding and not to interfere in or systematically erode the processes that govern the functioning of these institutions,” said the letter, signed by the parliamentarians from the Congress, Janata Dal (United) and the Left.

“We call upon the Honourable President to exercise his wisdom and prevent lasting damage to some great institutions such as the IITs and Universities of eminence,” it added.

Irani, in turn, said the government had no role in banning the student group for distributing controversial pamphlets that were likely “to create an atmosphere of hate.” In a statement, the ministry said: “The action has been taken by IIT-Madras as per the guidelines of the institute. The ministry of human resource development had nothing to do with this, except for forwarding the anonymous complaint received to director, IIT, Madras, for comments.”