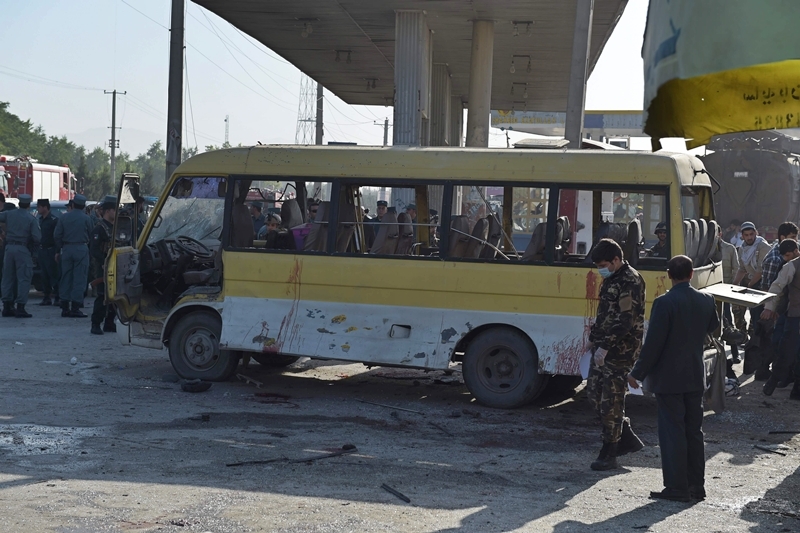 A suicide bomber hit a minibus carrying foreign security guards and caused several casualties early on June 20 in Kabul along the main road to the eastern city of Jalalabad, police said. The attacker was on foot, according to police, who refused to give a toll but said there were "multiple casualties" among the bus passengers who were "employees of a foreign compound".The bus was carrying Nepalese guards, according to an AFP cameraman, who also reported more than two dozen ambulances at the scene. / AFP PHOTO / SHAH MARAI |

Kabul: At least 14 Nepalese security guards were killed today when a Taliban suicide bomber targeted their minibus in the Afghan capital, a government official said.

Interior Minister spokesman Sediq Sediqqi said that eight others were wounded in the attack, and that police were working to identify the nationalities of the victims.

“The suicide bomber targeted a minibus of security guards of a foreign company, right now we are working to identify the nationalities of the victims,” said Sediqqi. But a police official told The Associated Press that the 14 dead were Nepalese citizens working as security guards for the private company that was attacked.

The official, who did not want to give his name as he was not authorised to speak to the media, said the wounded included four Afghan civilians. Dozens of police and many ambulances rushed to the scene to take the victims to hospitals of the capital. Taliban spokesman Zabihullah Mujahid claimed responsibility for the attack. Taliban insurgents have increased their attacks on both government employees and Afghan security forces across the country.