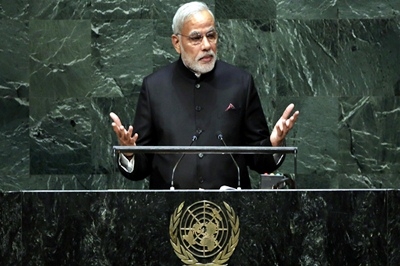 San Jose: Prime Minister Narendra Modi today said that the 21st century is India’s century and attributed the sudden change in India’s fortune to the commitment, strength and pledge of the 125 crore people of the country.

“For some time now, people are saying that the 21st century is India’s century,” Modi thundered in an address to a strong crowd of 18,500 Indian-Americans at the SAP Center in San Jose, which is the hub of Silicon Valley. Asserting that he is giving every minute of his life in the service of the nation, Modi said he would live and die for the country.

Modi said that in the past 16 months, world’s perception about India has changed dramatically. The world is looking at India with a new vision and aspiration. He attributed this change to the commitment, strength and pledge of the 125 crore people of the country.  Modi said he is confident of India’s success because 65 per cent of the population of the country are of less than 35 years – 800 million. “I can tell you with confidence that this country will not remain behind,” he said during his speech, which was marked with several round of thunderous applause. Modi said India is in a strong position today.

In just 15 months, India has scaled new height, has attained economic stability. In the past six months almost all rating agency have said in one voice that India is the fastest growing economy in large countries, he said. Prime Minister Modi said that no one ever thought that brain drain can become brain gain. “This is actually brain deposit,” he asserted, adding that it would serve its motherland at an appropriate time.

“Now it is the time that every Indian can show people their strength,” he said in his hour-long speech. Modi recollected the contribution of the Gadar party in San Francisco in India’s independence movement.  California has had a historic relationship and contribution in India’s development, he said. “Today is September 27 here and in India it is September 28. September 28 is the birth anniversary of Bhagat Singh. I salute the martyr,” Modi said and asked the audience to chant with him Veer Bhagat Singh Amar Rahe.

“I am meeting Indian American a year after the Madison Square Garden event in New York. I am coming to California after 25 years. A lot has changed. Many new faces that I see. I can see here India’s vibrancy here,” he said. Modi congratulated Indian-Americans for the place of pride they came created for themselves among the people of Californians. The world has changed its impression about India because of your talent in computers. With your talent, commitment, innovations you are forcing the world to change.

If they do not change their view about India, they would become irrelevant in the 21st century he said. On his ambitious Digital India programme, Modi said his mission is JAM – Jan Dhan financial inclusion program, Aadhar unique identity card and Mobile Governance. In just 100 days, 18 crores new bank accounts were opened, which deposited Rs 32,000 crores in the bank, he said. There is new movement in India to provide unique identification to every citizens of India. And finally mobile governance, on which work is in full swing, he said.

All these, he said, have resulted in reduction in corruption, saving hundreds and thousands of crores to the country’s exchequer. The Prime Minister said that today the world is facing two biggest challenges of terrorism and global warming. “This can be successfully addressed with firm commitment and co-operation with the people of the world,” he said. He rued that even today the United Nations has no definition of terrorism. If it has taken the UN 15 years to define terrorism, how long will it take to fight terrorism, he asked. Ridiculing the concept of good and bad terrorism, Modi said terrorism is terrorism. “There is no good terrorism and bad terrorism,” he said.

“India has been suffering from terrorism for 40 years. All human forces should come together against terrorism. There is need for an unity against terrorism. Only then there can be peace in the world,” he said. “India is a peace loving country. It is the land of Mahatma Gandhi and Gautam Buddha. It is the land of peace and ahimsa,” he said. Modi said he would raise the issue of terrorism again at the United Nations tomorrow. He is scheduled to address a UN Peacekeeping Summit convened by US President Barack Obama.

At the top of the event, he was greeted by a number of US lawmakers. Among the Congressmen who attended the event were Nancy Pelosi, former Speaker of the House of Representatives, and Ed Royce, the chairman of the House Foreign Affairs Committee. Congressmen Ami Bera and George Holding, two co-chairs of the influential Congressional Caucus on India and Indian Americans, were also there. Among other lawmakers include Loretta Sanchez, Eric Swalwell, Mike Honda, Tulsi Gabbard and Jim McDermott.