What was the inspiration behind The Queen of Jasmine Country. How did poet Andal come into your life and when did the idea to write about her come about?
As a reader, Andal had been in life for a long time – I must have found her around the time I discovered Sangam Tamil poetry in my teens. I especially found solace in her poems during a devastating heartbreak in my mid-twenties. But I never imagined she would become a part of my own writing until I had a dream about her in 2014 and she told me to write a novel about her. I made a note of this and let it rest.

Eventually, it was not the goddess Andal who came to me as a muse but a teenager named Kodhai, who lived in the 9th century and wrote incandescent and anguished poems, never knowing what would eventually become of them. Kodhai is the protagonist of The Queen Of Jasmine Country, who writes poems in a cowshed and dreams of the mythical landscape of Ayarpadi as she suffocates within the confines of her society and the frustrations of her newfound desire for love and intimacy. Kodhai has no idea she will one day be given the epithet Andal and worshipped throughout Tamil Nadu.

When you look at the legend of Andal as well as the literature attributed to her, what you have are many gaps, suggestions and unanswered questions. It was in these lacunae that my own story developed. Since very little is known about the historical figure, I relied mainly on her poems themselves, intermingled lightly with her hagiography, but more deeply with inferences and intuitions. The question being asked is what inspired me – and the answer is that I asked a version of the same question myself. What inspired her? What moved her? What made her write?

You have published two books on poetry already, but this, though not poetry, has roots in the same. How did it feel exploring the form in a new light?
The Altar of the Only World, a book of poetry I had worked on for nine years, came out in December 2017. The following month, without design, I found myself deeply involved with Kodhai and Queen. Having the Indian edition of my children’s picture book The Ammuchi Puchi come out in May also compressed and accelerated my life as an author this year. So it was only very recently that I realised how short the breathing time between Altar and Queen was. But here’s the thing: because I work on many manuscripts over long durations simultaneously, there was no leaving and therefore no coming back. I also don’t feel the differences between forms very much and don’t adopt different approaches to them. The High Priestess Never Marries was an amalgamation of women-centric fiction stories, while The Queen of Jasmine Country is fiction inspired by a real poet. How did the writing process differ for you?

I wrote The High Priestess Never Marries over five years in my mid and late 20s, which were an exhilarating and challenging time, and I began to write those stories essentially to distil my own experiences as a young woman in Chennai; the stories were incidental to my life as I lived it. But The Queen of Jasmine Country was an entirely different experience. My manuscript was the only thing that existed for me in the time in which I wrote it, which was a bare six weeks or so. It was very much an experience of surrender for me.

Was writing a full-length book after short stories challenging? Or was it liberating, the space to explore more and carve out a larger tale?

I’ve been trying to write a long novel since I was 19 years old (I am 33 now). I never expected for this short novel, Queen, to happen now, or in the way it did. The words just came and came and came. I do not expect to repeat this experience and think of it as a complete anomaly. I cannot analyse it. Perhaps if I ever finish that big novel, I’d be able to speak on comparative processes more easily. But everything I had written before it prepared me for Queen, and Queen has prepared me for what I believe I will still write.

Does The Queen of Jasmine Country also have a ‘Madras’ book style of presentation? One that’s translingual literature? Can you elaborate on what this means and its implication?

One of the frequent responses I received to The High Priestess Never Marries was that my book captured what being a free-spirited young woman in conservative Chennai was like, and that the city itself was very well-etched. But these traits came about neither because of love nor belonging, but because being an outsider and someone who had a lot of friction with this society made me observe things more carefully.

But Priestess is a contemporary book, whereas Queen is historical fiction. It is set in the greater Madurai region in the 9th century, and my protagonist fully inhabits only one language, Tamil. In terms of style, this meant that I had to make more careful choices about language, rather than use the melange of vocabularies available to me today. What existed in Kodhai’s time, and could be used as a metaphor? What did not, and thus needed to be excised? I was writing her interior monologue in English, a language she did not know, therefore any excessive use of Tamil was itself jarring. My challenge was to create a Kodhai who was completely Tamil within an English lexicon.

For readers who are not well-versed in poetry, how does the book appeal to them and draw them in, taking them along on Andal’s journey?
I would highly recommend that readers of Queen read Andal’s poetry (there are excellent translations available, and Archana Venkatesan’s The Secret Garland is my favourite). There are three reasons for this: the first is that I have mapped my plot on the poems themselves, the second is that reading her literature will counter the hatred propagated by casteist misogynists in the name of Andal, and the third and best reason is that the poetry is beautiful.

Your blog mentions Constellation of Scars as an ongoing project. Tell us a little about it.
Constellation of Scars is the novel I’ve been trying to write for all these years, and its shape has changed and grown with me. The novel’s true protagonist did not even emerge until several years into my journey with the manuscript. So it is ever-changing and has yet to reveal itself to me fully, but I will say this: my book is set in Eastern Sri Lanka, among a Tamil culture that is both rapidly disappearing and which does not have much space in the popular narrative (which is largely Northern Sri Lankan). This is where my roots are. 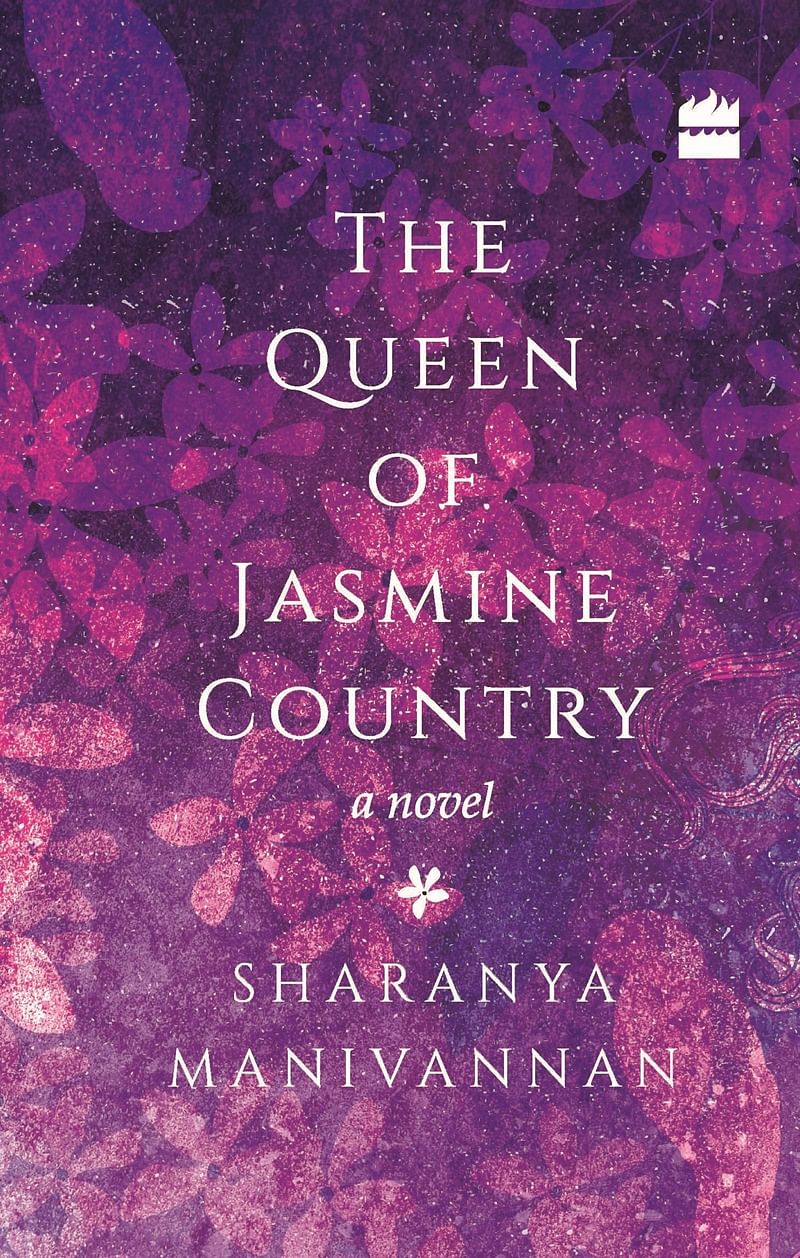 Reflect a bit on your literary journey so far. What direction do you see it taking in the near future?
I started to write when I was a child and I’ve been incredibly fortunate to see my passion and perseverance of decades begin to culminate in the last two years, when – to my continued astonishment – four of my books were published (my first book, a poetry collection, appeared ten years ago). In fact, I must admit that pondering the distance between my public and personal lives – i.e., the unchanged facts of my everyday reality and my growing visibility as an author – was one of the ideas that influenced Queen, and made me so aware of the distinction between Andal and Kodhai. Andal is iconic, but the one you get to know intimately in my novel is Kodhai.

What kind of power do you feel the written word has? How do you use it in your own works?
This is what Kodhai says in my book, on the first night when she begins writing what will become the Tiruppavai: “Tonight, under this arena of starlight, I take up my stylus and press it by the glow of a clay lantern into dry palmyra leaves. It is on this night that I dedicate myself – to my self, to who I truly am, to what is invincible and without bondage of time, that predates me, that will outlive me.” In that grandiose moment, she transcends the limitations of her life. The writing itself is both an act of devotion and experience of the sublime.

Do you believe that writer’s block exists? If so, how do you break through such a block?
Any kind of creative paucity is completely natural. Perhaps in our capitalistic society, it’s the pressure to be constantly productive that makes us feel we are blocked. But everything good takes time. Rivers and blossoms have their seasons. So do we. The best thing to do is to rest, to be kind to yourself, to walk a little further into the world at large and see what it gives you.

A book that had a strong impact before she took to writing – “I cried for days when I was told the myth of Karna, and this experience had an indelible influence on how I understand the power of stories: written, spoken, drawn, sung.”

One book as a personal prized possession – “I’d cheat and say I’d choose my fully-loaded Kindle.”

Books in the pipeline – “I’m working on a graphic novel set in Eastern Sri Lanka, about the erasure of folklore and imagination as a consequence of war. Other poetry and short fiction projects are ever-simmering in my imagination.”