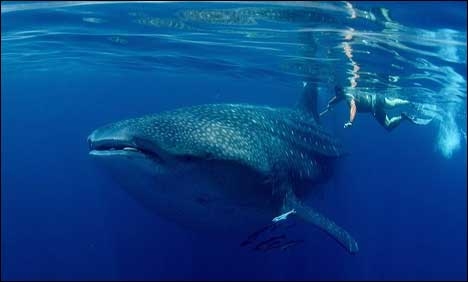 Boston: Scientists have recorded the heart rate of the blue whale for the first time, and revealed surprising operating extremes of the heart that may limit the size of the largest animal on the Earth.

The researchers from the Stanford University in the US used four suction cups that secured a sensor-packed tag near the whale's left flipper, where it recorded the animal's heart rate through electrodes embedded in the centre of two of the suction feet.

Analysis of the data suggests that a blue whale's heart is already working at its limit, which may explain why blue whales have never evolved to be bigger, the researchers said.

The data also suggest that some unusual features of the whale's heart might help it perform at these extremes. Studies like this add to our fundamental knowledge of biology and can also inform conservation efforts, they said.

The data captured showed striking extremes, the researchers said. This data was intriguing because the whale's highest heart rate almost outpaced predictions while the lowest heart rate was about 30 to 50 per cent lower than predicted.

The researchers think that the surprisingly low heart rate may be explained by a stretchy aortic arch --part of the heart that moves blood out to the body --which, in the blue whale, slowly contracts to maintain some additional blood flow in between beats.