Ritu Narwale became the first woman to drive the Pink i-bus on BRTS for the first time in the state.

Ritu Narwale became the first woman to drive the Pink i-bus on BRTS for the first time in the state. | FPJ

Indore: Indore has added yet another feather to its cap with the first-ever woman driving a public bus in the country in which all the passengers were women too! The record was made in the city on Thursday morning. Ritu Narwale from Indore drove the ‘pink’ i-bus on BRTS for the first time in the state. After several days of training, Ritu operated the bus for the first time by seating female passengers. More than 50 women passengers travelled on this bus. The trial run started at 7 am on Thursday.

In order to provide safe and convenient public transport facility to the women of the city, Atal Indore City Transport Services Limited (AICTSL), in February 2020, commissioned pink buses in the BRTS corridor. The plan was that, in these special buses run for women, the drivers and conductors would also be women, but due to a lack of women drivers, these buses were being operated by male drivers for a long time.

But, some time ago, after the management found two women bus drivers, AICTSL started training them. After a month of training, when a female driver, Ritu Narwale, seemed prepared, the first-ever ride was organised. Ritu was tested to drive, and she passed with flying colours. Finally, she was given the opportunity to drive a bus for passengers for the first time after two hours of training between 3 am and 5 am on Thursday morning.

Her trainer calls her ‘perfect’

On the very first ride, Jayant Pal, the supervisor who had trained her, was present to boost her confidence. ‘Ritu drove two laps between Niranjanpur and Rajiv Gandhi circles this morning,’ Pal said. During this, more than 50 women passengers travelled on the bus. ‘Ritu drove the bus with full confidence. Parking a bus at a stop is considered the most important thing, which is also done very well by Ritu,’ Pal said.

AICTSL spokesperson Mala Thakur said that the women passengers were also very happy to see a woman bus driver for the first time in the pink bus being run for women and encouraged Ritu. ‘Ritu has become the first woman driver to run the state’s first passenger bus,’ Thakur said. ‘I’ll take a trip in a few days with Ritu. Then, she’ll be given a chance to run the bus for the full time. The training of the second woman driver, Archana, is also going on. Soon, she, too, will start running buses with passengers seated,’ said Sandeep Soni, CEO, AICTSL. 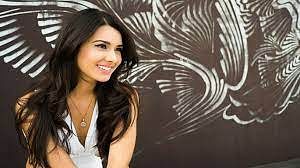