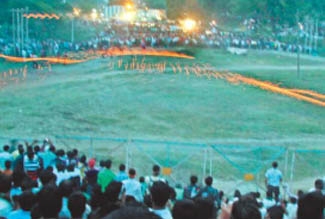 Indore : At least 77 persons were injured in ‘ Hingot war’ near Gautampura, on Friday. People of two villages hurled ‘ Hingots’ ( firecracker balls) against one another during the traditional ‘ Hingot war’ that occurs annually.

The appeal of the district administration and police failed to prevent them from participating in this traditional fight.

This traditional war injured over 200 people and disabled many of them in last five years.

The ‘ Hingot’ war takes place on ‘ Dhok Padwa,’ a day after Diwali, when people of Gautampura and Runji villages hurl firecrackers against one another. Before the battle, they also seek blessings of the local deity.

The two teams then assemble on either side of the ground where they are welcomed like warriors on battlefield and then they attack their rivals with ‘ Hingots’. ‘ Warriors’ from each side fend off these flaming missiles with the help of shields, even as hundreds watch this annual event with blazing ‘ Hingots’ catching its target unawares.

TI, Gautampura Hakam Singh Pawar said that condition of two was critical while the rest were discharged after the primary treatment.

Besides the ‘ soldiers’ ( players), many spectators were also injured as they did not have any protective shields.

The police have, however, refrained from filing any case since it is a traditional sporting event.

However, they seized some ‘ Hingots’ from people selling on the footpath.

Pawar said that he had requested the villagers not to participate in the ‘ war’ but to no avail.