Boundary construction was sanctioned in 2020-21 and the work was done by Sadiq Qureshi, headmaster and then secretary of the School Management Committee under the direction of District Education Center Sardarpur.

Sardarpur (Madhya Pradesh): The boundary wall constructed around Bhopwar Middle School which was built exactly a year back spending Rs 4.5 lakh has started crumbling. The village is situated around five kilometres away from Sardarpur tehsil headquarters.

Boundary construction was sanctioned in 2020-21 and the work was done by Sadiq Qureshi, headmaster and then secretary of the School Management Committee under the direction of District Education Center Sardarpur.

After the matter of sub-standard work came to the fore, a team from District Education Center, Dhar, following the instructions of Dhar district collector Dr Pankaj Jain reached Bhopwar school and took a sample of the brick and material of the boundary wall that collapsed.

According to the information, the boundary wall was approved in the year 2020-2021 and the cost of which was Rs 4.5 lakh. Its first instalment of Rs 2.25 lakh was released for the construction of the boundary wall around, while the second instalment of Rs 2.25 lakh is yet to be released. Due to non-payment of the second instalment, plaster, paint and gate installation work is lying incomplete.

Villagers claimed that the construction work of this boundary wall has been made with very poor material. A complaint regarding this was made to the minister in charge on August 31, 2021.

But he was not relieved for one year in a bid to cover up the shoddy work. Ultimately, the complaint was made to high-level officials about it on September 15, 2022 and more than a year later, Qureshi was transferred by the block development education officer Pramod Kumar Mathur.

When contacted deputy engineer Manoj Verma of Janpad Education Centre, Sardarpur said the boundary wall of Bhopwar School has been assessed and sent to DPC Dhar. From there, further action will be taken. It is not fair to call it shoddy construction work.

The poorly built boundary wall is lying incomplete and has not even been painted.

Technical experts say that looking at the quality of construction work it does not seem that Rs 2.25 lakh has been spent on constructing the wall. The villagers opined that students could be at risk if the construction work of the wall is not completed soon and the gate installed.

On Tuesday, following the instructions from collector Dr Pankaj Jain, the team of assistant engineers of the District Education Centre visited the school. They inspected the school boundary. After this, they took a sample of nine bricks, sand and cement for lab testing.

The team also inspected the damaged beam of the main gate. The assistant engineer attributed the 12 feet collapsed portion of the boundary wall to poor construction and non-erection of columns. Assistant engineer Mithilsharan said that the sample will be sent to the lab of the Rural Engineering Department for testing. After investigation, if the use of substandard material is found to be certified, then a proposal for penal action against the then headmaster, ex-officio school management committee secretary Sadiq Qureshi will be sent to the competent authority. 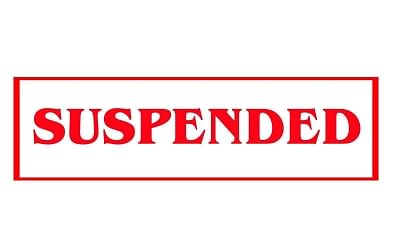