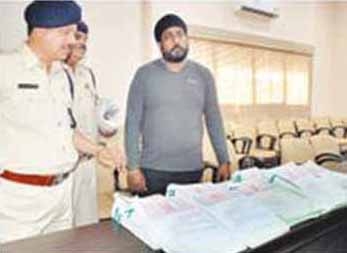 Involved in fraud in six states, duped about 900 people

Indore: Bhawarkuan police have arrested a fraudster who was involved in duping many people in the name of installing towers of mobile companies and ATM machines on Thursday. The accused have also cheated people of six states including Punjab, Haryana, and Madhya Pradesh.

Addressing media persons on Thursday, SP ( West) Aabid Khan said that the accused has been identified as Simran Sandhu ( 37), a resident of Bhawarkuan who hails from Punjab.“ One Harjit Singh, a resident of Pipliyarav, has lodged a complaint against the accused that he had been duped of Rs 50,000 in the name of installing a mobile tower,” Khan said.

He further said that during sustained interrogation, the accused admitted that he was involved in cheating more than 900 people in Punjab, Madhya Pradesh, Chhattisgrah, Rajasthan and Himachal Pradesh.

“ A case of forgery has also been registered against the accused in Patiala over the complaint of 37 people. We are going through the criminal record of the accused and also checking its record in other states as well,” the SP said. ASP Devendra Patidar said that the large number if stamp papers have also been seized from the residence of the accused including the agreements for installing ATMs and mobile towers.

“ The accused targeted people in different cities by introducing himself as representative of a telecom company. The accused offered a rent of Rs 13000 per month. He was also taking Rs 5000 as the security deposit from the people,” he added. The interrogation of the accused is on and it is believed that a racket of fraudsters would be busted.