As the big cat was changing its locations, the forest officials failed to catch it.

Burhanpur (Madhya Pradesh): The clever leopard that had been giving the foresters the slip for the past15 days fell into their trap on Friday night, said forest officials.

As the big cat was changing its locations, the forest officials failed to catch it, they said.

They, too, changed the locations of the cage and put the meat of a goat in it. The leopard then fell into the snare.

No sooner had the leopard fallen into the trap than the forest officials rushed to the spot and examined the animal.

Now, they plan to release it in the forest. Earlier, the forest officials caught two leopards.

Apart from that, there was fright among the villagers of Bhatkheda, since they often sighted a leopard.

When the villagers sighted the leopard twice in a banana field in Bhatkheda on July 13 they informed the forest department about it.

The forest officials laid a trap, but the leopard continued to deceive the foresters for 15 days.

They did not allow any villagers to near the cage. Even the forest officer and other officials kept away from the cage.

Ranger of Nepanagar forest Mayank Pandey said the leopard they had caught on Friday was ferocious.

It was an arduous task to capture the animal which they plan to release in either forests of Omkareshwar or in the forests of Narmadanagar, he said.

Read Also
Indore: Students should not be deprived of education on financial ground, says Madhya Pradesh... 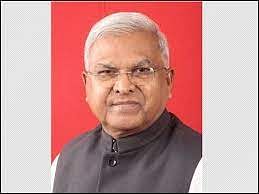