Madhya Pradesh: Man swept away in the Kshipra after saving child

The immersion of Goddess Durgaís idols is organised in the village a day after Dussehra. Villagers in large numbers throng the spot to witness the event.
FP News Service 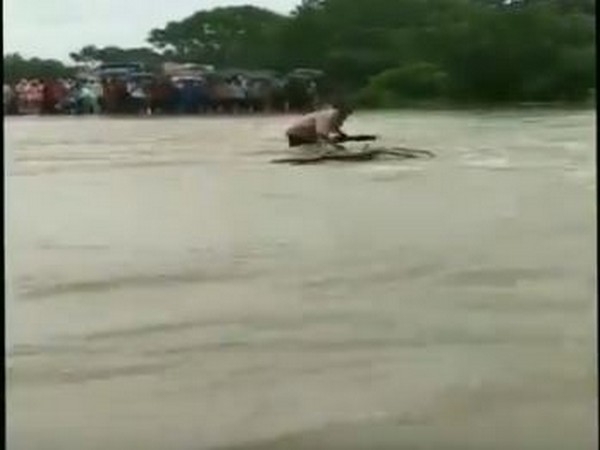 Alot (Madhya Pradesh): A 38-year-old person from Alot was swept away in the Kshipra after he slipped into the deep water while taking bath on Saturday at around 5:00 pm.

Police said that the person has been identified as Gopal, son of Shankarlal Soni. Police personnel and officials were present at the banks of the river to manage idol immersion of Goddess Durga. They immediately launched a rescue operation, to no avail.

Gopal along with his brother Komal Soni and two kids reached Dashwa Ghat to witness the immersion. They decided to take a bath at the river but one of his kids slipped into the water. Gopal managed to save his child somehow and handed him over to his brother Komal. But in the process Gopal lost his balance and due to a strong current took him into deep water.

Komal immediately called for help and police personnel and administration officials immediately reacted to this. But it was too late as Gopal disappeared from the eyesight within a few moments. The rescue team continued their search operation for the next two hours and called it off when it became too dark.

The immersion of Goddess Durgaís idols is organised in the village a day after Dussehra. Villagers in large number throng the spot to witness the event. SDOP Priyanka Dudwe, police station in-charge Neeraj Sarwan and their team were present.

Officials said that search operation will be resumed early on Sunday.