Madhya Pradesh: Hingot Yudhha restricted by administration due to COVID-19 this year 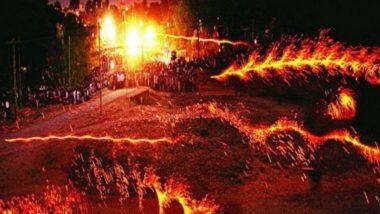 The traditional Hingot Yudhha in Gautampura could not be organised after the orders from the district administration due to the COVID-19 situation this year. Some people, who were seen with Hingot, were detained by the police from Runaji area on Sunday night.

A day after Diwali, the traditional Hingot war is organised in Gautampura where thousands of people throng every year but due to COVID-19 outbreak, the district administration didn’t give permission to organise the function.

Gautampura police station in-charge Ramesh Chandra Bhaskare said that the police was deployed at the ground where the program is organised. However, the people and the political parties have cooperated with police and they talked with the organizers of the program.

On Sunday evening, the police received information that some men with Hingot are creating ruckus in Runaji area after which the police team reached there and detained some men from there. After seizing Hingot, they were released by the police after warning.