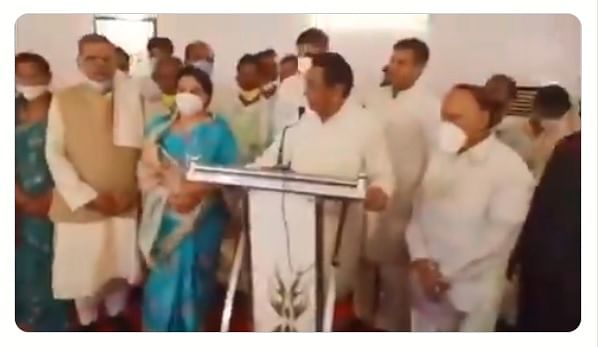 Ahead of the bypolls to 27 Assembly seats in Madhya Pradesh, former state BJP MLA Parul Sahu joined the Congress on Friday. |

Ahead of the bypolls to 27 Assembly seats in Madhya Pradesh, former state BJP MLA Parul Sahu joined the Congress on Friday.

She joined the opposition party in the presence of former state chief minister Kamal Nath.

Welcoming her into the party fold, Nath said, "I am really happy that Sahu has taken a right decision of joining the Congress considering the current scenario in the state. It is her homecoming."

Nath accused the ruling BJP of misleading the people of the state though false announcements.

Taking a dig at Chief Minister Shivraj Singh Chouhan over his announcements, the Congress leader said, "Chouhan keeps a coconut in his pocket and wherever he gets an opportunity, he breaks it and makes an announcement." "The BJP has defamed the state. Even Dr Babasaheb Ambedkar would not have thought that such an unethical incident would take place in Madhya Pradesh," Nath said in an apparent reference to the BJP's return to power after toppling his 15-month-long government earlier this year.

"The BJP has played with the Constitution and democracy and people of the state will give their decision on the issue in the upcoming bypolls," the state Congress chief said.

These bypolls would decide the future of the state, he added.

Sahu, who had become a BJP legislator in 2013 from Surkhi seat in Sagar district, said that by joining the Congress, she has made a "homecoming" and said she was "very happy" about it.

Sahu, who was not fielded by the BJP in the 2018 state polls, joined the Congress along with her supporters.