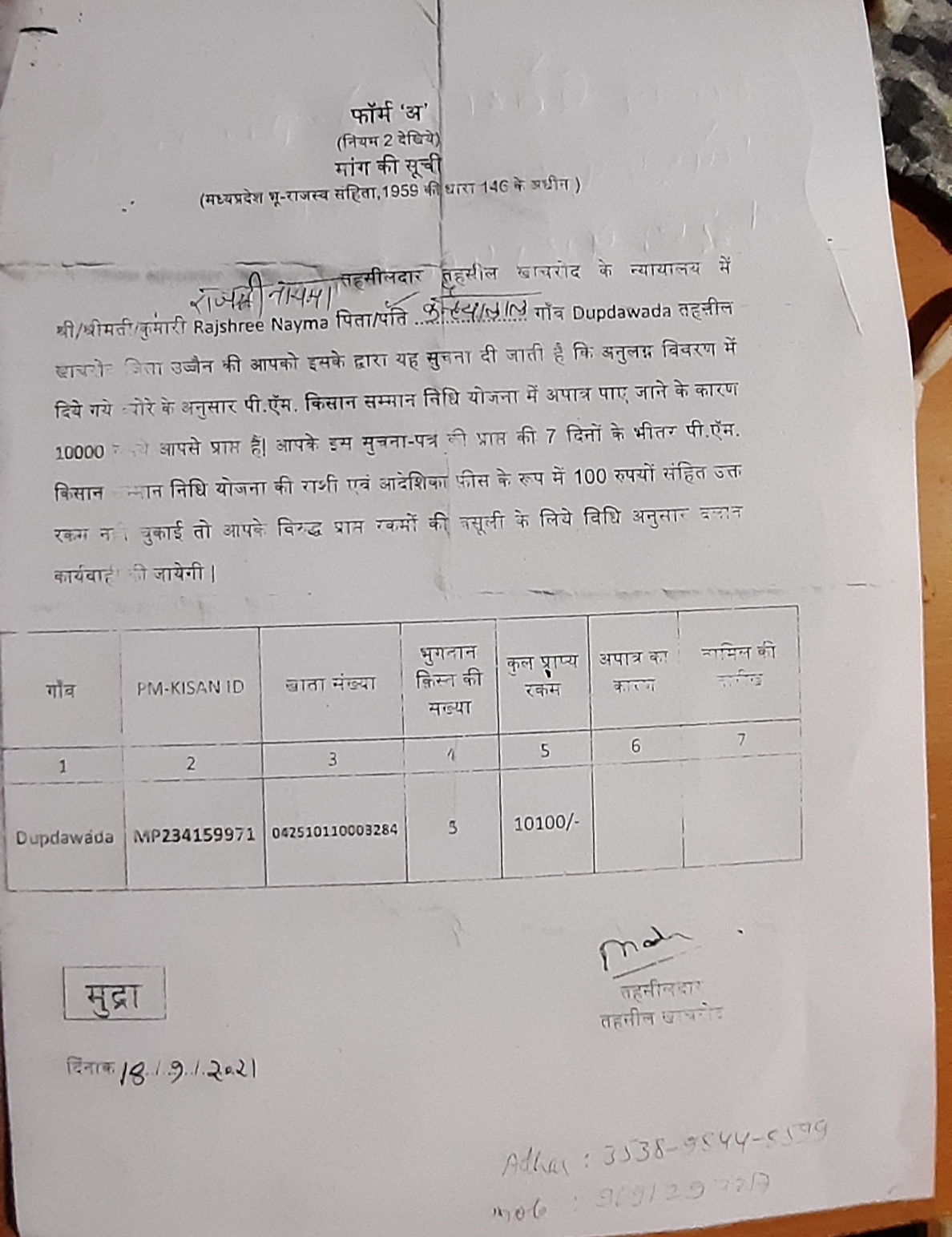 Khachrod (Madhya Pradesh): Large numbers of ineligible people are receiving cash benefits meant for farmers under the Pradhan Mantri or Mukhya Mantri Kisan Samman Nidhi (PM or CM Kisan) scheme while many eligible farmers alone in Khachrod tehsil have been deprived of their dues in Khachrod tehsil of Ujjain district.

These incidents have taken place for a variety of reasons, including outright fraud or by errors on part of officials in depositing the money in the wrong accounts.

Under PM-Kisan scheme Rs 6,000 is disbursed to eligible farmers each year in three instalments.

In Khachrod, the revenue department has issued notices to scores of people who have wrongfully benefited for recovery of Rs 1.43 crore. Department officials claimed that this amount have been deposited into the 1959 accounts and now tehsildar and patwaris visiting every door-steps based on the records they have.

In another type of botch up – people who do not even have a bank account have been served notices of recovery. Now they are running from pillar to post to settle the issue.

When contacted Khachrod tehsildar Madhu Nayak admitted error and said that the amount of Kisan Samman Nidhi was transferred to ineligible people by the representative from Khachrod.

The rules allow farmers with land records until February 1, 2019 to benefit from the scheme. Spouses and children up to 18 years of age are considered a single family unit. A joint director of the agriculture department also said that MPs, MLAs, ministers and mayors are not allowed to avail of the scheme. Officers or employees in the central or state government are not eligible either, with the exception of multi-tasking staff, class IV staff and group D employees. Chartered accountants, architects, doctors and engineers are not eligible either, nor are farmers who receive pensions of more than Rs 10,000.

Many claimed that Khachrod or its adjoining villages are not only places where such irregularities have been reported. Few days ago similar incident were reported in Jhabua district- where funds were deposited into the account of a tribal who failed to surrender the amount. In Khachrod many ineligible people who have received funds are not in position to surrender this amount and they are now in dilemma. Administration could ask the bank officials to block the accounts of income tax payees if the amount is not returned. Some amount has also been recovered by the revenue patwaris who are going door-to-door for recovery.

How farmers can get benefit

The Central scheme, launched on December 1, 2018, seeks to support farmers in need by spending over Rs 75,000 crore annually. Farmers have to apply online on Jan Seva Kendra portal with their land ownership documents, Aadhaar Card and bank passbook. After verification by revenue department, farmers receive the money directly in their bank accounts.

Officials wishing anonymity said panchayat secretaries and patwaris must scrutinise the forms to avoid such glitches. Officials failed to verify the eligibility so funds under the Kisan Samman Nidhi was transferred into the accounts of ineligible farmers while eligible farmers were deprived of the benefits.