“A 68-year-old male patient of Sehore who had been admitted to Bombay Hospital since March 9 succumbed to the disease on Tuesday. Condition of patient was critical when he was admitted to hospital,” informed IDSP incharge Dr Santosh Sisodiya.  “We have been taking daily report about suspected patients from private hospitals. With increase in number of patients suffering from viral disorders, we have also been reporting cases of cough and cold,” he said. 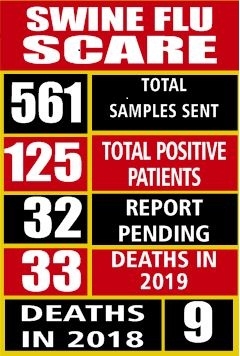 Numbers of patients suffering from fever, body ache and viral disorders are on rise due to fluctuation in temperature. “We have advised hospitals to keep track of patients, approaching with complaints of fever and body ache, as detection at early stage can save their lives,” he added.