With the beginning of Spring season, the weather turned out to be pleasant and positivity gleamed through the bright yellow themed offices, temples, schools and shops.

On this occasion, a procession was taken out in Abuja Muhurta and worship of Goddess was performed in the various temples dedicated to goddess Saraswati.

Goddess Saraswati was anointed before the puja in temples. Subsequently, Saraswati Mahayagya was organized in which a large number of devotees in Tulsi Nagar society.

Prayers were offered to the goddess to help the country fight corona pandemic and finally get liberation from the deadly virus, said KK Jha, society spokesperson.

After the yagya, the maha aarti was organized in which a large number of devotees from different areas of the city were present. After maha aarti, the program of Prasad distribution started which continued till late at night. Schools, colleges and universities across the city also celebrated the occasion by offering special prayer to goddess Saraswati. Schools held virtual celebrations for primary and middle school students as most schools in the state are still running via online education only.

Devotees wore yellow clothes, made donations and performed special pujas. Not only the clothes, yellow flowers were used as offerings and also part of decorations in households as an indication to welcome the spring season.

A number of puja pandals displaying colourful idols of Saraswati were installed in temples and residential colonies in the city.

Bengalis celebrated the festival with a different hue as special Bengali food including khichdi, sandesh were served on the occasion. Hundreds of Bengalis from the city gathered for this day-long celebration at Kali Bari temple, Bapat square to mark the occasion.

“This is the first main festival after Durga puja and in Bengal it is celebrated with great fervour. Here also we organized special programme that began with Saraswati puja followed by bhog and other programmes,” said Gautam Gosh, media coordinator Bengali association Indore (Bapat square).

Several mass wedding events were also organised in the city citing the day as auspicious. 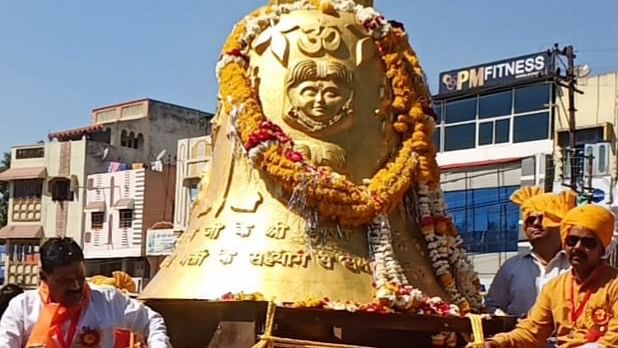