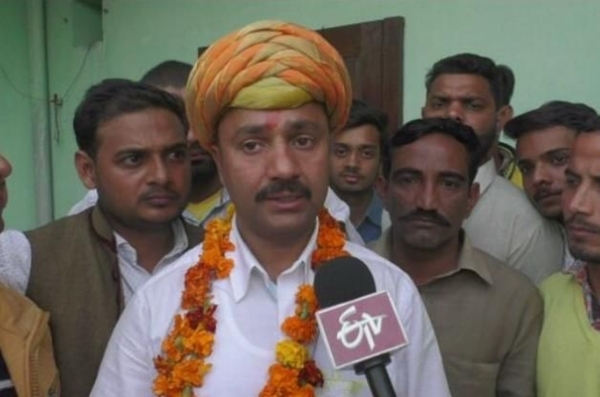 Indore: Sher Singh Rana is likely to contest in Lok Sabha Elections 2019 representing Sapaks party, subject to court orders. Rana is known for assassinating Phulan devi (the “Bandit Queen”) in 25 July 2001 in what has been described as an avenging of the 20 innocent Kshatriya Thakurs death for no reason.

Further, his escape from Tihar Jail and dgging Hindu Samrat Prithviraj Chauhans Grave and getting back his “asthiyas”(relics) to his nation “India” have been glorified by some groups. In a face-to-face interview with our reporter, possible candidate from Sapaks for Indore, Sher Singh Rana disclosed his views, life and possible plans: Ques: What do you think about Prime Minister Narendra Modi and Bahujan Samaj Party chief Mayawati hitting on each other and role of caste based politics? Rana:

While Modi and Mayawati are hitting on each other as of now, after the election, Modi will bow down and touch the feet of Mayawati. Such scenarios are quite common. Samajwadi Party chief Akhilesh Yadav has already promised that if voted to power that it will levy tax of 2 per cent on the ‘upper caste elites’ whose total wealth of household is more than Rs 2.5 crore. Such gimmicks are often used to woo voters, but in all, they hit the general public. Modi has also that private organizations will have reservations as well.

The reservations repeatedly allotted are cut from general population chances to get jobs, study and have a future. What can we expect from general public to do if not protest when they are left with no chances to earn their bread and even get basic needs met! Our ambition is to remove the caste based politics.

We understand that it will take longer, but we want to at least begin the competition and reduce the chances of winning of other parties. Ques:Which party do you think has a higher chances of winning and why? Rana: The current scenario is that Congress only talks and quotes that this is what they will do. BJP on the other hand says that they will give and work for the country.

They even show that they are giving only paper. Basically, it is more of showing that works and is connecting with many people. Working well with the pen, The National Democratic Alliance (NDA) is a centre-right political alliance led by the Bharatiya Janata Party (BJP) will most likely win and make government. However, Modi won’t be the next PM. Ques: Do you come from a political background? Rana: No.

There is no one in my entire family, who has ever been in politics. I come from an agricultural background, where my father was a farmer with a good share of land. Politics is something that comes from the heart to serve and bring changes. I have been a social activist since my college days. In fact, 90 percent of politicians in our country including PM, home minister and many other politicians do not have a political background. BJP is ruining politics by forcing actors, actresses and film makers to become politicians. It does not send a good message.

We cannot expect actors to serve the region, as their main work is to act. I keep hearing complaints from people about it. Poor farmers of Mathura had informed me that actress turned politician Hema Malini turns up only for election. These poor farmers cannot go to Mumbai to ask for her help. Ques: What’s your educational background? Rana: I completed my schooling from St Gabriel’s HS School, Roorkee.

Further, I have completed my Bachelors in Political Science, History and Sociology from DAV College, Dehradun. I was arrested Ques: What’s your wife’s background, who might contest from Indore? Rana: I had an arranged marriage to Pratima Raje Rana. She comes from a political background. Her mother is city president of Guwara, Rajasthan. My father- in-law is Jila Panchyat president.

Ques: Are you hoping to get any support from them if nominated from Indore? Rana: My in-laws have connections and links in Indore groups as well. So, yes that would be another support for me. I am a part of many groups in Indore and of course, have support from Rajputs. Further, our issues appeal to all, where we want to have equal treatment for all with freedom to practise religious values for all.