The termination orders were issued after a video went viral, in which IMC employees were seen throwing idols of Lord Ganesh from dumpers into a water body.
Staff Reporter 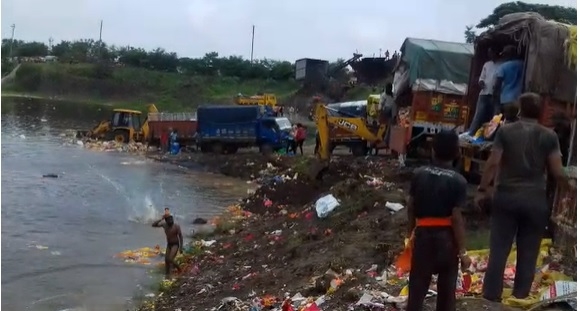 Indore: Following instructions from urban administration minister Bhupendra Singh, Indore Municipal Corporation (IMC), on Monday, terminated the services of seven employees for messing up the immersion of Lord Ganesh idols. The termination orders were issued after a video went viral, in which IMC employees were seen throwing idols of Lord Ganesh from dumpers into a water body.

A press release issued by IMC stated that muster-karmis (contractual employees) Hemraj Ramlal, Sunil Laxminarayan, Karan Mohanlal, Rajesh Ramji, Mukesh Kaluram, Lakhan Ramphool, and Raju Shankarlal had been suspended after they were found to be at fault.

IMC had set up idol collection centres in all zonal offices. People had handed over the idols they had installed in their homes to IMC employees at the collection centres. Municipal commissioner Pratibha Pal had stated that the idols should be immersed in environment-friendly, artificial ponds. If idols still remain, they should be immersed with all rituals in a pond created due to accumulation of rainwater at Jawahar Tekri.

As many as 47 dumpers filled with idols reached Jawahar Tekri. On Monday, a video featuring IMC employees throwing idols into the water body vent viral on social media. Taking cognisance of the video, Singh directed Pal to take action in the matter. Upon inquiring, Pal found seven employees were at fault and they were sacked.