Universities and colleges were shut following the outbreak of Covid-19 in March last year. The campuses were reopened in January this year but the same had to be shut again following the second wave of Covid-19.
Staff Reporter 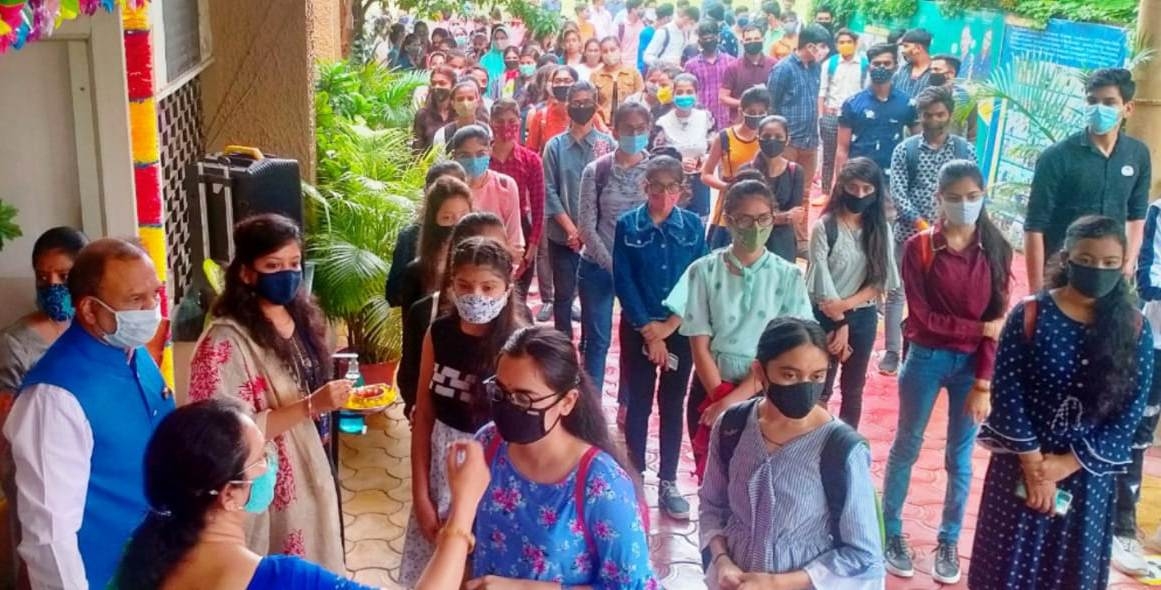 RPL Maheshwari College staff applies tilak on forehead of students coming back to campus after a gap of six months. | Pintu Namdev

After a gap of nearly six months, institutions of higher learning in the city on Wednesday saw students walking into the campuses for attending classes.

But there was a contrast between private and government colleges on students’ turnout.

While private colleges witnessed students, though not in large number, coming to campuses for classes, government colleges wore a deserted look.

“We applied tilak on the forehead of students visiting colleges after a long gap. Studies of students had suffered badly due to Covid-19. We are hopeful that there won’t be any third wave of Covid-19,” said Dr Rajeev Jhalani, principal of RPL Maheshwari College.

“Though turnout of students was thin on the first day of commencement of offline classes, it was nice to see students finally walking into the campuses,” he added.

Amit Soni, a student of GACC, said that he was happy that finally, colleges opened. “Though classes could not be conducted as students largely gave a miss to the first day of new academic year, I am happy that things are inching back to normal,” he added.

Indore division additional director (higher education) Dr Suresh Silawat said that the colleges would soon see chirping of students on campuses. During the first few days, there will be a low turnout. But when classes will be conducted regularly, the turnout will increase,” he added.

Silawat also said that he had instructed all colleges in Indore division to ensure strict adherence to Covid-19 protocol.

Universities and colleges were shut following the outbreak of Covid-19 in March last year. The campuses were reopened in January this year but the same had to be shut again following the second wave of Covid-19.